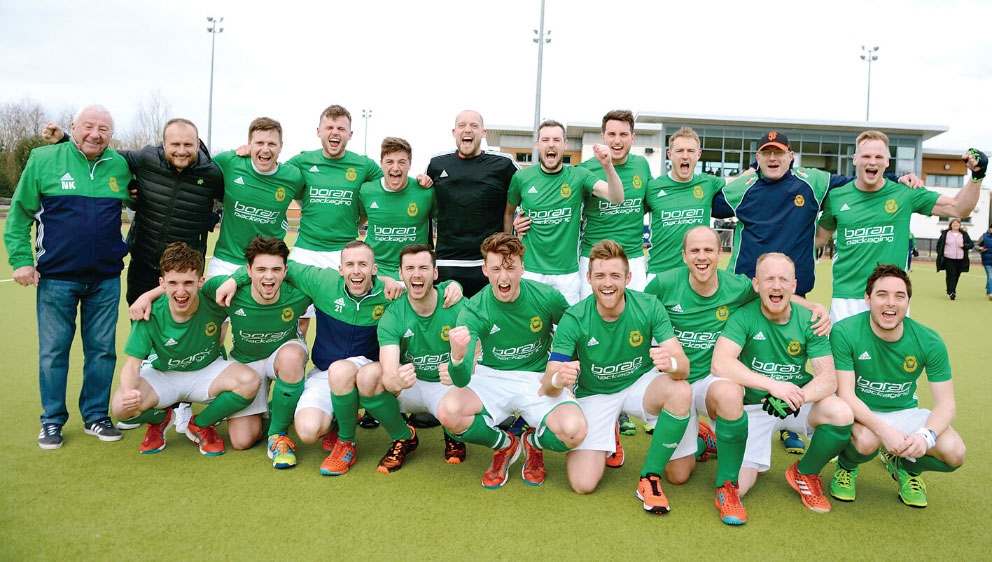 GLENANNE are back in Europe after dishing out a 4-2 defeat to closest rivals Lisnagarvey that saw them capture the Men’s EY Hockey League title at Comber Road on Saturday.

Joe Brennan’s side found themselves two goals down before storming back for the decisive victory with Ireland international Shane O’Donoghue firing home a hat-trick on the day.

The Tallaght side celebrates

Unbeaten on the league trail all season, Glens looked to be heading to a first loss against a Garvey outfit that still had skin in the game and were hoping to close the gap to six points with three games left to play.

Daniel Nelson opened the homeside’s account before Andy Williamson doubled their advantage, but O’Donoghue’s penalty stroke hauled Joe Brennan’s side right back into it ahead of the recess.

O’Donoghue fired home his and Glenanne’s second to restore parity after the break before Shannon Boucher applied the finishing touch to a swift counter attack that edge the leaders in front for the first time in the game.

And O’Donoghue ensured they remained there when he flicked home six minutes later, sparking huge celebration.

Delighted with his side’s superb achievement, Glenanne Coach Brennan told The Echo “Lisnagarvey have a great history and are one of the most successful clubs, so to go there and put in a performance like that was just great.

“Just going up there and seeing the facilities they have. We have a lot of young players who would not have been in that position before, so it’s great for them too.

“We went two goals down despite playing really well, but the belief was always there that we could come back because we’ve done it before.

“To get to the EHL is just huge. It’s like the Champions League of hockey and to get one of those spots is just great.

“We had lost to Three Rock Rovers [in the Irish Senior Cup] but that gave us the chance to look at few things. When you’re winning all the time, it can cover up some cracks.

“We’ll be play-ing fourth place in the Club Champ-ionship and the shackles will be off for us because we have that spot in Europe.

“The lads are hungry to win it and we deserve it. We can try out a few things over the next couple of games before the start of the Club Championship in May,” he added.

Winning their first All-Ireland League title since 2000 came just a day before the club celebrated clinching only their third Irish Junior Cup and first since 1995 after they beat Pembroke Wanderers 3-2 on Sunday.

Brennan, who was also involved with this achievement, said “To win this title for the first time in 23 years was just great. Pembroke are a very experienced side with a lot of ex-internationals.

“But there’s a great bond between all our players in training and that cohesion in what we were doing [in the final] ended up showing.

“We’re a real family club with great supporters, and the amount of texts I’ve had after the weekend has been amazing,” he said.