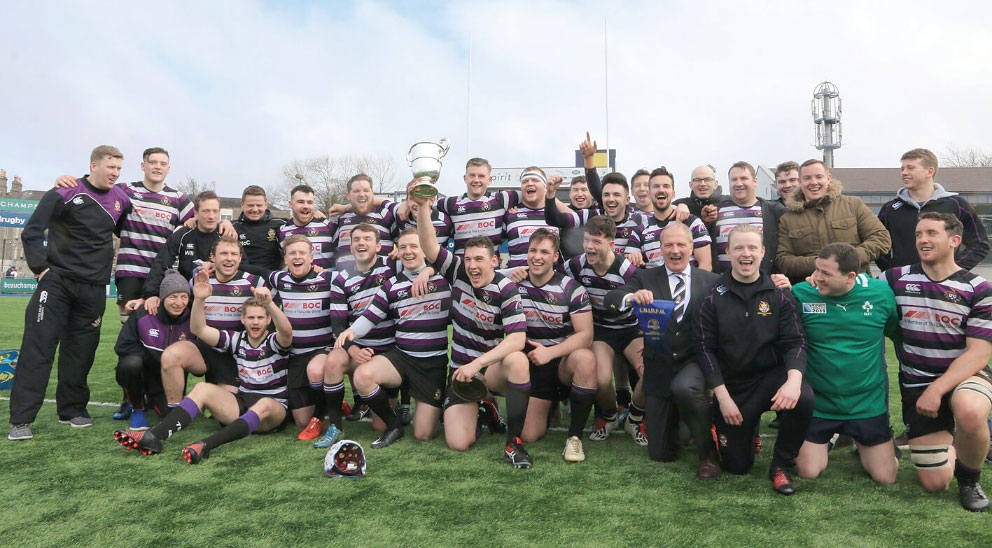 IT PROVED a great weekend for Terenure College RFC, winning all five of their games from the Under 17s through to their firsts, including three finals that saw three trophies brought back to Lakelands.

Knowing that they needed to beat Dublin University to have any chance of overhauling Cork Con in the hunt for second place and a coveted home semi final, Terenure’s firsts delivered the goods, scoring eight tries as they won out 50-12 in front of a bumper crowd in Lakelands on Saturday.

And with Cork Con losing to Clontarf, they earned their just rewards with a home semi final spot against the Cork side which will take place in Lakelands on the weekend of April 28/29.

On that same afternoon, the club’s fifths, captained by Les Devlin, travelled to Estuary Road to take on Malahide for the Metro Division 10 trophy.

The homeside showed their class early on and led 7-0 at the break, extending that to 12-0 soon after the restart.

However, ’Nure fought back, with tries from Devlin and Aaron O’Grady while the reliable boot of Risteard Mulcahy jr converted both scores to give ’Nure the win and the league title.

On Sunday, the Under 17s faced St Mary’s in thrilling Shield Final in which the lead changed hands on several occasions, with a late score clinching them a slender 17-12 win and the second trophy of the weekend.

The seconds were next up, playing DLSP in Donnybrook for the Metropolitan Cup.

De la Salle started stronger, and took an early lead, but in the second half Nure’s pacey backs eventually found space, to help propel their side to a 36-20 point victory.

And to cap off a great weekend, the Terenure Under 20s also produced a resilient performance to edge out neighbouring rivals St Mary’s 17-14  in the McCorry Cup quarters.

Their initial encounter at this stage of the competition had finished deadlocked at 24-24 and Mary’s took a commanding 14-0 lead in the replay.

But ’Nure grew into the match throughout the second half, scoring two converted tries, before a late penalty gave them a 17-14 win.