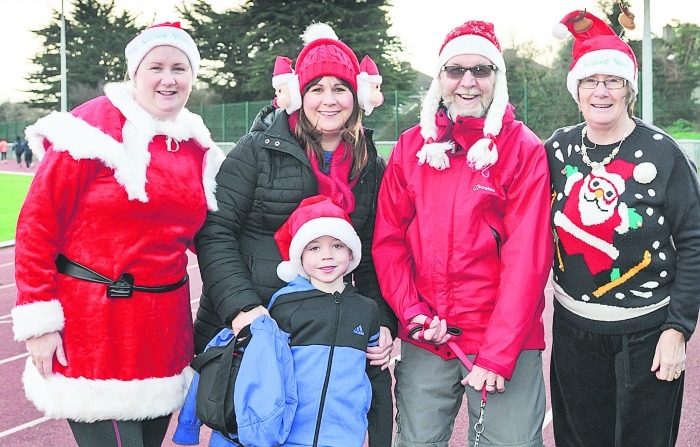 Going the extra mile for GOAL

CHRISTMAS day became a charitable affair for hundreds of runners who set off on the Goal Mile run events held throughout South Dublin County.

The annual run, which raises funds for Goal’s work in developing countries, saw hundreds of runners don their running shoes and Santa hats to raise money.

Participants had to run or walk a mile and then make a donation to the charity, as a way of embracing the Christmas spirit and supporting Goal’s work.

Now in its 12th year, the Tallaght run on Christmas day was one of hundreds of locally organised runs throughout the country.

John Cullen from Tallaght Athletics Club said: “On a cold but dry morning there was a large turnout and in just two and a half hours €7,000 was collected.

“The organising committee would like to say a sincere thank you to everybody who supported the event and to the members of Tallaght AC for all their help on the day.”

Mr Cullen added that it was a “very festive occasion”, where some people came dressed up as Santa for the morning run.

The money raised now brings the total donated over the last 12 years by the people of Tallaght and surrounding areas to just over €90,000.

Gerry Martin from Lucan Harriers told The Echo: “There was a constant flow of people, with lots of families taking part.”

Mr Martin praised the variety of age groups that took part, describing how some people brought “bikes, prams and skateboards” to the event.

Organiser Melissa McGuire commented: “It was lovely, with lots of families.”

Ms McGuire described the event as an opportunity for runners to “have a break from Christmas”, with most participants wearing running gear instead of festive outfits.

The Corkagh Park event raised just over €1,000 for Goal.

The Goal Mile is now in its 35th year, where more than 100 events were held throughout the country during the Christmas period.