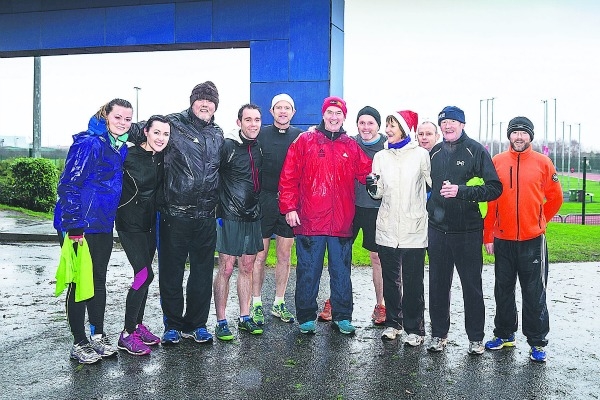 Going the extra mile for GOAL

RUNNERS, Joggers and walkers raised thousands for charity across the county in this years GOAL Mile run.

The GOAL Mile is now in its 34th year and the annual event sees tens of thousands run, jog or walk a Mile for GOAL, helping the aid agency raise money and awareness for those who need it most around the world.

There were Goal Miles held this Christmas in Tallaght AC, Lucan Harriers, in Palmerstown’s Waterstown Park.

There were Goal Miles also held at the Pope’s Cross in Phoenix Park, at Eamonn Ceannt Park in Sundrive, in Kilteel, at Round Tower GAA Club in Clondalkin and at Corkagh Park in Clondalkin.

The weather was challenging for all concerned but there was still a good turnout across South Dublin.

On Greenhills Road, Tallaght AC managed to raise over €6,000 in just two and a half hours. Despite the horrible weather, there was still a good attendance for the 11th annual Goal Mile held at the club’s track on Christmas Day morning.

A Spokesman for the club told The Echo: “The conditions obviously reduced the attendance. The amount donated reflects great credit on people from Tallaght and surrounding areas who once again turned out in driving rain to support some of the poorest people on the planet.

This brings the amount donated since the event started locally in 2004 to over €80,000.

The organisers would like to say a sincere thank you to all who have supported us over the years”.

Over 200 runners turned out at Lucan Harriers on Christmas Day morning for their series of Goal Mile runs.

Again the weather was challenging and this may have affected the attendance but the morning ran smoothly.

“The monies raised came to around €2,700. We would like to thank those who helped on day, and to our regular contributors. We had our usual family and school groups as well.”

Over in Clondalkin’s Corkagh Park, there was a great turn out on St Stephen’s Day.

The runners raised over €670 for GOAL. Organiser Melissa Maguire told The Echo that she was happy with the turn out.

She said: “It was hard as it was very wet. We raised over €670 and last year we managed to collect €900. Obviously this was down to the weather. It was good fun. There were all sorts of runners from the very serious to families turning out. We were very happy with the response.”