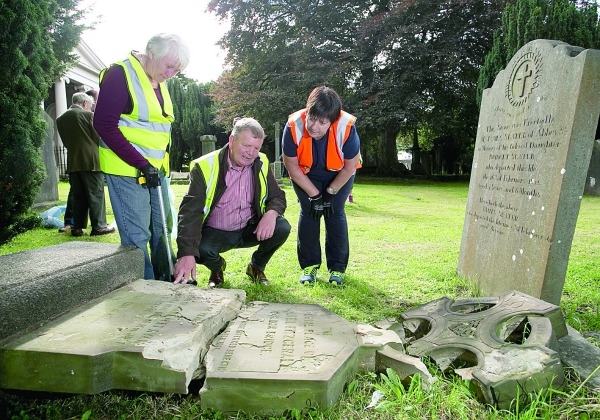 THE headstone of WT Cosgrave, the first leader of the Irish Free State, and 12 others, were smashed again by vandals at Goldenbridge Cemetery.

The cemetery has been the target of destructive vandalism on a number of occasions in the past couple of years.

Glasnevin Trust confirmed most of the 13 Victorian and pre-Victorian monuments at the cemetery were completely destroyed in the latest attacks.

Gardaí suspect a local teenage gang were behind this and other similar acts of vandalism.

In a statement, the Trust confirmed the grave of WT Cosgrave, the father of former Taoiseach Liam Cosgrave, was destroyed during the attack.

The Trust said the vandalism is “upsetting for all associated with the cemetery.”

Glasnevin Trust and Richmond Barracks, are working with the Inchicore Development Association and Dublin City Council, to involve the cemetery and its history as part of a co-ordinated local development project.

Fianna Fáil councillor Daithí de Roiste blasted a “horrible element of society” and said he is working with the local area manager and gardaí to try and address the problem.

Set on two acres of land, the cemetery incorporates classical 19th century features, and was the first Catholic cemetery built in Dublin after Catholic Emancipation – purchased in 1828 by Daniel O’Connell for £600.