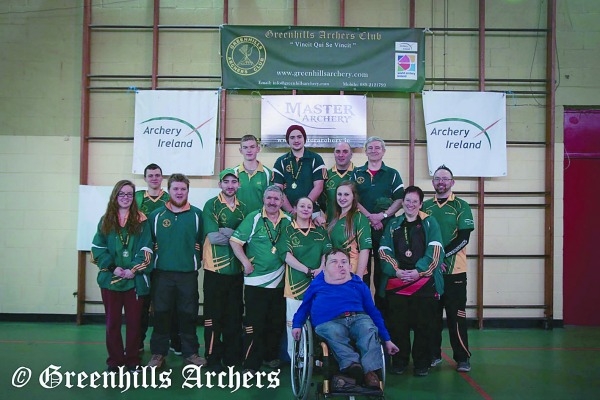 The scene was set on the Saturday evening with a late-night set-up thanks to the hard-working team pulling out all the stops, with the junior league being run while the usual Saturday afternoon junior training was in full attendance.

Vice chairman and coach Adam Banks kicked off the archery academy from 6.30 to 8.30 on the Saturday evening, with the aid of Aida Alexandru, Alan Doyle and Rob Sweetman.

After the juniors finished their Saturday afternoon training, the set-up began under the guidance of Adam Banks for the Leinster Championships. The two judges once again gave praise to the set up on the day.

Tony McLoughlin and John Kane, both national and international judges, gave their time. Vice chairman Adam Banks taking the role of Director of Shooting for the day.

With the stage set, the competition started, with 10 clubs and Greenhills Archers taking part in some very close matches along the shooting line.

The breaks came and gave time for some great banter between archers from different clubs, young and not so young, male and female, across all categories.

Melina Collins of Liffey Archers scored 762 in youth women recurve to take gold – a very bright future ahead for the young liffey archer.

Two young men on the national junior squad had a great day shooting with each other, with the eventual winner Greenhills archers own Keith Hammond taking top spot from Liffey archers Alex Malone, with respective scores of 1023 and 788.

The Cadet Compound category saw Ewan Wells of Liffey Archers in 1st place up against Gavin Blanchfield in 2nd from Kilkenny, followed by Conor Higson from Cavan Archery Club.

Greenhills Archer junior Ben Merriman took gold in his category with a creditable score of 1034, adding to his gold medals won in the school shoots that Greenhills Archers are participating in this year. Well done and keep up the good work.

The senior barebow women’s category was as close as any other. Ann-Marie Murray from Cuchulainn Archers took first place with a outstanding national record score of 943.

Record scores for 30 and 60 arrows ahead of Enniscorthy and Master Archery’s Sarah Dobbs sponser for the Leinster Indoor champions shoot scoring 867.

In 3rd place was Dundrum Archers own Claudia Heinze with personal best of 797. The three ladies had great banter all day, encouraging each other on.

In Masters Men, Enniscorthy Archers took 1st place with a respectable score of 935 and made the journey worthwhile.

In the Ladies -525, two great friends from Liffey and Greenhills Archers pitted against each other with Sinead O’Connell too strong for Grace Duff, with scores of 495 and 904 for first and second.

A very different tale in the Ladies +525 with the 20 points between the top two: 1072 to 1052. Megan Bryer of Dolman Archers just ahead of Katrina O’Reilly of Liffey Archers. Unfortunately, Liffey Archers’ Sarah Dunne had to retire due to injury taking 3rd spot.