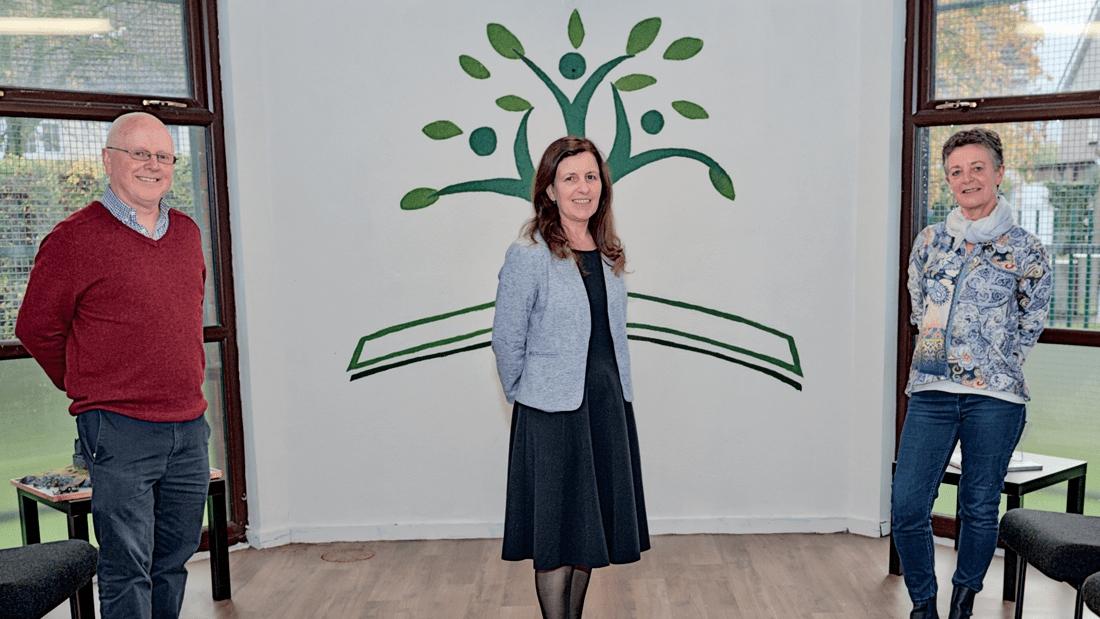 Greenhills going from strength to strength

WHEN Paul Barnes first set foot in Greenhills Community College as a schoolboy in 1973 the school had only been open for three years.

Now, 50 years on from when the school opened in 1970, Paul has been a teacher of English and German in the school, and in the adjoining further education college, for over two decades.

He remembers during his time as a pupil that the students didn’t wear uniforms and technology was not a feature of the classrooms, but there are some things that didn’t change – such as the quality of teaching that influenced Paul’s decision to return to his alma mater after he became a qualified teacher.

His path into teaching wasn’t a straightforward one, but Paul’s decision was cemented by a guidance counsellor in Greenhills Community College advising him to consider teaching when he was a teenager, and the idea never left him.

“I did my Leaving Cert in 1978 and then worked for Dublin Council for a while,” Paul remembered. “Then I lived in Toronto for five years. I decided to go back to Ireland when I was 28 and studied at night in UCD to become a teacher.

“When I was in school, I had a career guidance teacher who asked me if I’d go into teaching, and that stuck with me.”

Paul was hired by Greenhills Community College as a newly qualified teacher in 1992, and he has been actively involved in developing the school’s soccer team since then, as he believes the balance between schoolwork and extracurricular activities is what made his school years so enjoyable.

“You’re coming back as an adult, so you’ve a different relationship with the school,” said Paul.

“And the fact that I went to school here meant that I knew what made the lads tick, and I’ve always been involved in the school’s soccer teams.”

However, Paul believes that the fact that pupils of Greenhills Community College are supported and encouraged within the classroom makes the school unique, and adds to his sense of enjoyment as a teacher.

“There is a huge variety of students in the school who have different abilities, and we find out what those abilities are for each individual student,” added Paul.

“It’s a holistic approach – all of our students get a very rounded education.”

Deirdre O’Dwyer, who has taught science and maths in the school since 1982, agrees that the school’s focus on the pupils as individuals is a key aspect of the educational environment in Greenhills Community College.

“The care and attention that the teachers have been able to give to the students, both when I started teaching and even now, is phenomenal,” she said.

“The students get individual attention in each subject – no student is left behind.”

Similarly to her colleague Paul, Deirdre also spent some time away from Greenhills Community College, when she took a three-year career break in the mid-80s to teach in New York, but on her return to Ireland she knew she wanted to go back to the school.

“I love the attitude of the staff and the teaching methods here,” she said. “I really missed it when I was away.

“I think the fact that I didn’t look to go anywhere else when I came back from the US shows how much I like the school.”

Greenhills Community College has gone from strength to strength over the past five decades, and while the school wasn’t able to celebrate with a large-scale event as a result of the pandemic, it hasn’t dampened the spirits of the staff and pupils, who are excited about the future of the school.

“I hope that in the coming years the school keeps doing what it does best – continuing to grow and educate children from Greenhills and surrounding areas,” said Deirdre.

For Paul, he takes great pride in seeing how the school has become such an essential part of the community it serves through the addition of a further education college on the school campus, and how the school’s students can achieve their goals with the support of their teachers.

“We can offer all kinds of possibilities for our students,” he said.

Applications for the admission of new pupils for the academic year 2021/2022 are now being accepted at https://greenhillscollege.ie

NEWER POSTLocal Faces: Dr Anna Rose Prior, Consultant Microbiologist at Tallaght University Hospital
OLDER POST‘It’s so important to recognise what people are doing in the community’