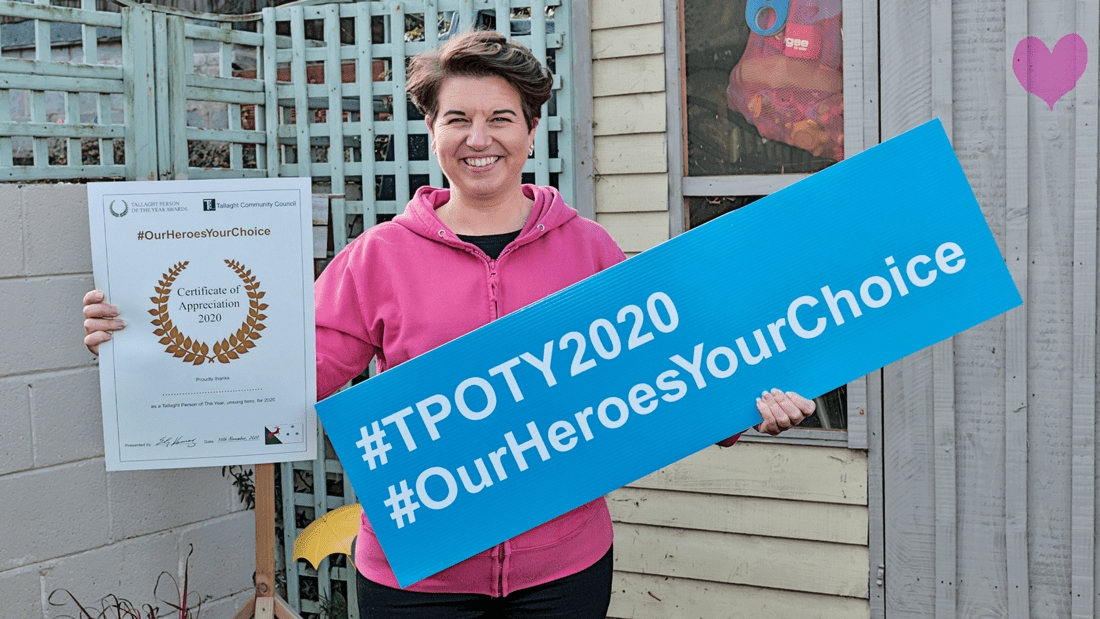 Last November, Audrey Brown picked up the Learning and Innovation Award at the Tallaght Person of the Year Awards 2019.

Twelve months down the line and Audrey is holding onto her award for a another year, due to the cancellation of the community-led awards ceremony in line with Covid-19 guidelines.

Audrey Brown holding her Certificate of Appreciation for Twigs Afterschool

However, Audrey has encouraged people to continue with Tallaght’s annual tradition of recognising the unsung heroes by taking part in the #OurHeroesYourChoice awards.

Tallaght Community Council (TCC), the organisers of Tallaght Person of the Year, has created a Certificate of Appreciation, which members of the community can virtually present to a local hero or group – anyone they believe deserves a ‘thank you’.

“When I was nominated for an award last year and then won, I was stunned…but really, really proud”, Audrey told The Echo this week.

“It definitely inspired me to do more.

“I think it’s so important to recognise what people are doing in the community, especially this year more than ever.

“It’s been a tough year for everyone and I think those that have made a difference to someone’s life despite all of the challenges should be recognised, they deserve a thank you.”

Living in Newbawn, mother-of-three Audrey has been a coach with swimming school Turtle Tots for a number years.

Over that time, and from experience of going swimming with her son Ashton, who has Autism Spectrum Disorder (ASD), Audrey noticed a need and demand for lessons for children with autism.

Audrey raised the idea of group classes for children with autism to Turtle Tots and was given the go-ahead to develop a programme – which she has been running in the Maldron Hotel since.

The swim classes, which resulted in Audrey’s Tallaght Person of the Year award win, are suspended at the moment due to restrictions.

However, Audrey is looking forward to getting the classes back up and-running when it is safe to do so, and is also focused on developing other inclusive sporting activities for children with autism, like yoga.

“I’ve found the second lockdown pretty tough… and so have many families I’ve spoken with who have children with special needs”, Audrey said.

“I really miss the lack of social interactions and there is a general feeling that there is no supports for families.”

However, one local service which Audrey believes has continued to support families in the area is, afterschool Twigs.

Based in Killinarden, Twigs provides assisted afterschool care for children with a diagnosis of ASD – with Audrey choosing the team at Twigs for a Certificate of Appreciation.

“I know Twigs is a business but the feeling of passion they have for the kids they care for is unreal”, Audrey said.

“The girls who run it are fabulous and they are trying their best to remain open and are following all of the guidelines.

“They’ve been tremendous in their efforts and have even brought in a new play therapist.

“They have such a fighting spirit for all of the right reasons, and for kids with autism.

“If Tallaght Person of the Year was going ahead this year, I definitely think Twigs would be a derserving winner of the Learning and Innovation Award – and they definitely deserve a Certificate of Appreciation.”

Who would you give your Certificate of Appreciation to?

TCC has encouraged members of the community to virtually present their Certificate of Appreciation by email or by tagging their unsung hero or group on social media using the hastag #OurHeroesYourChoice.

Alternatively, the certificate will be published in The Echo for those who would like to post their Certificate of Appreciation.

NEWER POSTGreenhills going from strength to strength
OLDER POSTStories from the Frontline: I considered it a blessing to be able to help those who needed it