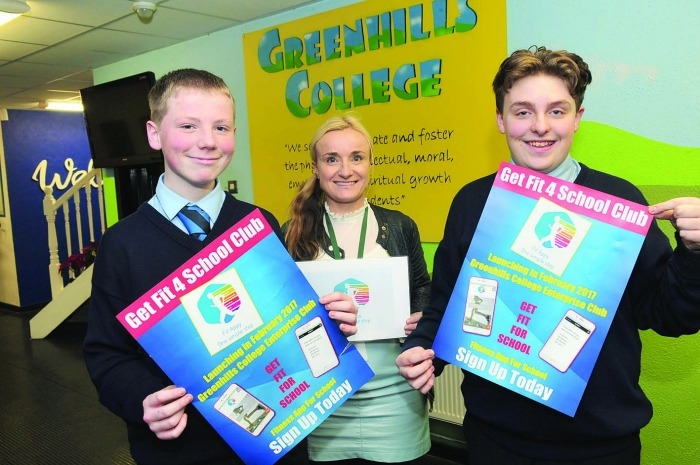 The awards programme is run by local enterprise offices in each region throughout the country, which sees business-minded second level students compete to be awarded first place in the regional and the national awards final.

Competing students are tasked with coming up with innovative business ideas and then successfully developing it to a stage where sales are being generated.

Paul McArdle and Cian Byrne, both third year students in Greenhills Community College, are developing their own fitness app called ‘FIT Appy’ for the competition.

The school’s business teachers Una McNamara and Maria Donoghue are helping the students with the app, and Ms Donoghue told The Echo: “The app is orientated totally towards teenagers in their age group.

“The app is still in its infancy stages at the minute.”

The two students came up with the idea as “they are very conscious about their fitness”, according to Ms Donoghue, and the app grew from that point.

Ms Donoghue described the app as being at “almost prototype stage”, and when discussing the need for sales to generated in order for the app to meet the criteria to be considered in the South Dublin Student Enterprise Awards, she said “They haven’t made any money from it yet as it falls into social awareness.”

The two teenagers are now in the early stages of rolling out the app in a local fitness group that Ms Donoghue is involved in, and she added that the boys have formed a “brilliant partnership” and that they are very enthusiastic about the app.

Students competing in the competition have to hand up business reports early this month, before being shortlisted ahead of the South Dublin regional finals in IT Tallaght this March.