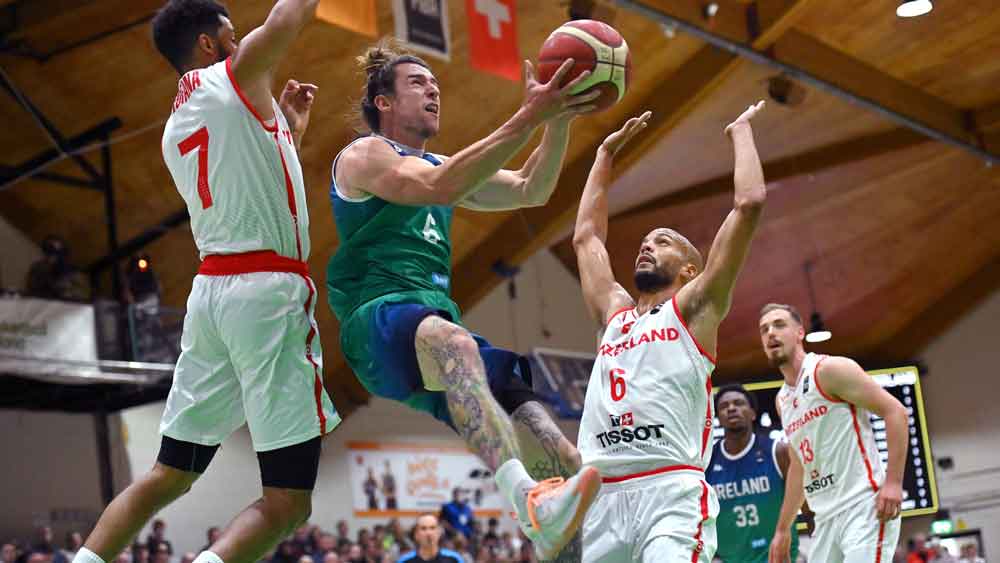 IRELAND senior men’s basketball team mounted a huge challenge, but, in the end lost out 88-82 to Switzerland in their closing FIBA EuroBasket 2025 Pre-Qualifier in the National Basketball Arena yesterday.

Heading into this match on their back of their loss to Austria in Salzburg the previous Wednesday, Mark Keenan’s men were hoping to bounce back in front of a sell-out crowd in Tallaght.

And they looked poised to do just that as they raced 10-6 in front following sublime three-pointers from CJ Fulton and Sean Flood from Kingswood.

Yet by the close of that first quarter, the Swiss had restored parity at 25 points apiece, despite a fantastic put-back dunk by Clondalkin man, Aidan Harris Igiehon that brought the entire Arena to its feet.

Griffith College Templeogue player, Lorcan Murphy really stepped up to the plate in the second quarter, chalking up 10 points in a nine-minute period.

And his assist, set up Jordan Blunt for a long-range three as, again, the two sides found themselves deadlocked at 45-45 heading in at the halftime break.

Yet it was in the third, that the visitors managed to steal some ground, Roberto Kovac and Jonathan Kazadi inflicting some heavy damage as the Swiss went on a 16-9 run that helped see them 10 points up heading into the final period.

That gap was enlarged to 13 early in the fourth, thanks to a Selim Fofana three-pointer, but the re-introduction of Taiwo Badmus sparked a surge that saw Ireland close to within four of their opponents with 2:43 remaining.

Yet the Swiss managed to hold out against a huge challenge by this Irish team that will now be looking forward to the next EuroBasket qualifying repechage in August 2023.

Despite the defeat, Ireland Head Coach, Keenan remained upbeat “saying “I think we’ll learn a lot from the last three windows. There’s a great crop of players coming through as well, so the future is bright.”