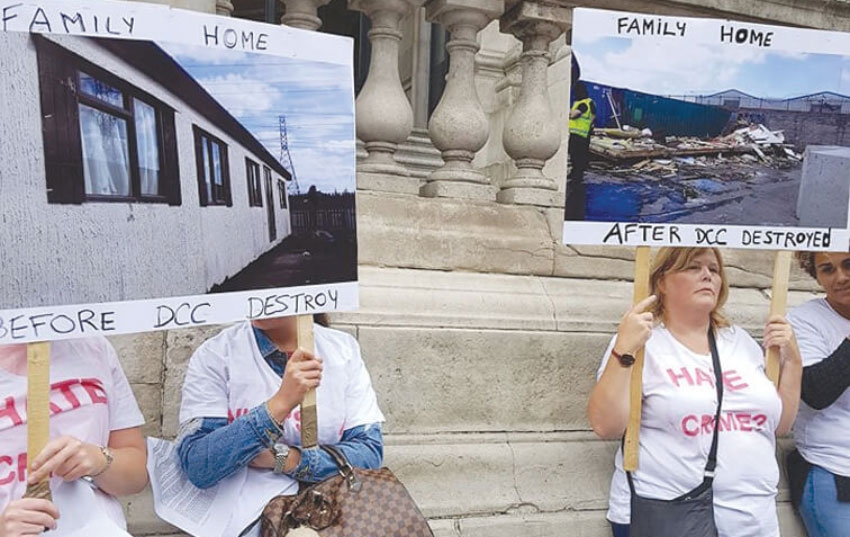 A TRAVELLER group is demanding the suspension of a Dublin City Council official pending an investigation into the demolition of a mobile home unit in Ballyfermot.

Ann and Michael Connors and their four kids grew up in Labre Park but had been living in emergency accommodation since January due to a dispute with another family on the site.

They had left their personal belongings at the Labre Park unit.

The mobile unit in Labre Park was demolished on June 14 – the city council stating the “illegally parked trailer” posed a safety risk for all residents “evidenced by illegal electrical connections etc”.

DCC said the family were informed “on three separate occasions” that if they did not remove their property by 11.30am, June 14, they would remove it.

Ballyfermot Traveller Action Project dispute this, stating the family were engaged in negotiations with DCC which had yet to be completed.

Lorraine McMahon, co-ordinator BTAP said: “There is a very clear legislative process to remove a family for any reason, and that process was not followed. The family were not consulted. The council are in breach of their own legislative guidelines. It is an outrageous breach of human rights.

“Even if a family are to be evicted – and that was not the case here – in any local authority there is a legal process with a Section 10 notice which had yet to be provided. There was no due process.”

DCC said they have provided emergency accommodation to the family since January 2018 and “following their departure, the bay was secured and the family were asked to remove their property and the trailer unit.”

DCC say they photographed and itemised every item on site before removal to a storage facility.

The council said the base of the trailer was defective and had to be demolished.

BTAP say there was no evidence this was damaged.

According to DCC, the contractor was “met with some hostility” but managed the situation “professionally over a three hour period”.

“DCC acted lawfully and legally at all times. Sufficient time and consideration was given to the former occupiers to comply with lawful requests and assistance was offered to facilitate this.

“DCC acted to address the immediate and urgent concerns of the BTAP to contain the area and prevent an illegal occupation of the bay by an individual whose presence could destabilise the site and have a devastating effect on the daily lives of other residents.”

Cllr Hazel De Nortuin forwarded an emergency motion at the area meeting on Wednesday on behalf of BTAP, requesting legal evidence for the demolition.

A meeting was due to take place after the area meeting between DCC and local representatives.