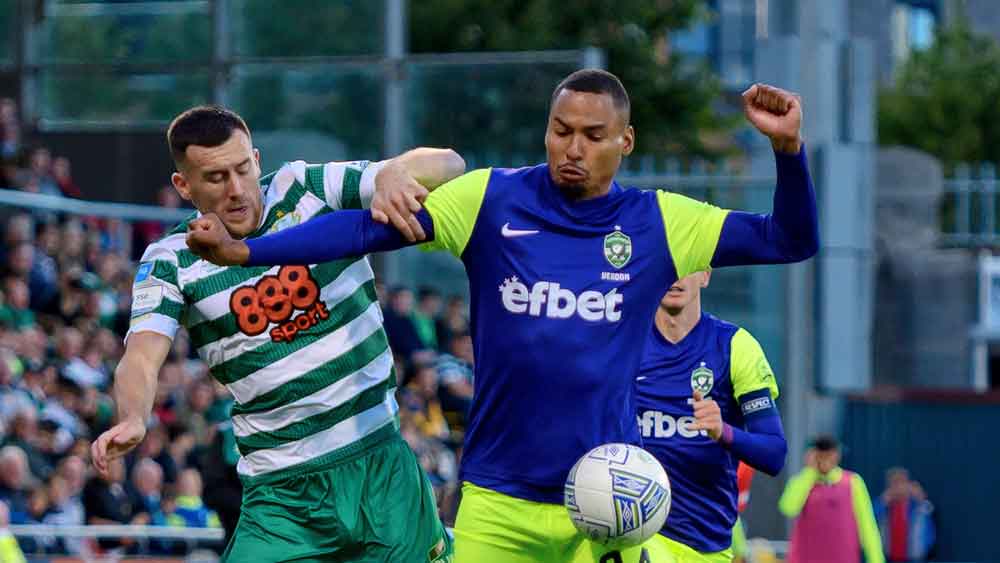 Tallaght man Aaron Greene, who found the back of the net for Shamrock Rovers, tries to win the ball from Olivier Verdon (Photo: Paddy Barrett)

DESPITE recording a gutsy 2-1 win in the second leg of their tie with Bulgarian outfit, Ludogorets at Tallaght Stadium last night, Shamrock Rovers exited the UEFA Champions League qualifiers at the second-round stage.

Having suffered a 3-0 reversal in Razgrad seven days earlier, Stephen Bradley’s Hoops were faced with a seemingly impossible task on their home patch.

However, the defending SSE Airtricity League Premier Division champions dared to dream after goals from Aaron Greene and Aidomo Emakhu cut their aggregate deficit to the bare minimum as the match drew to a close.

The visitors had also been reduced to 10 men by this point, but a stoppage-time finish from Cauly Souza ultimately ensured that they would weather this challenge and progress.

Rovers will now transfer to the third qualifying round of the Europa League, with the first of two games against North Macedonia’s Shkupi to come in Tallaght tomorrow week (August 4).

And the current Airtricity League leaders can draw plenty of confidence from last night’s performance that saw them ask no shortage of questions of the Bulgarian giants. 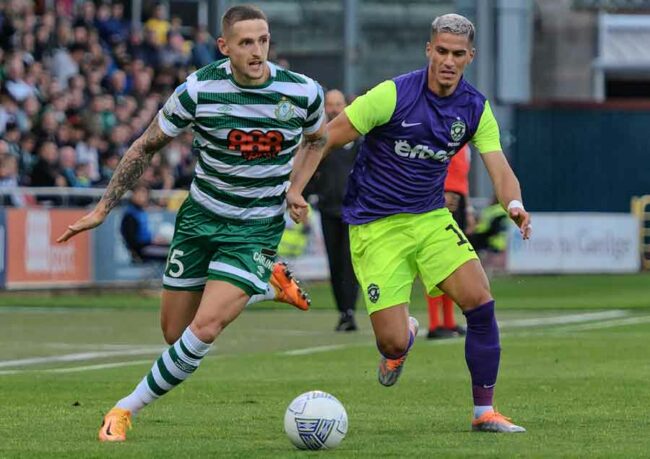 In front of an attendance of 6322 on Tuesday evening, the Hoops took just 21 minutes to get up and running.

An excellent delivery in from Andy Lyons was met by Graham Burke, who had impressed off the bench in the first leg.

Sergio Padt denied the former Preston North End attacker, but Kilnamanagh native Greene was on hand to fire home the opening goal of the contest.

Richie Towell had a subsequent shot drift marginally off-target and while a second did not arrive before the break, Rovers were still left with a fighting chance on the resumption.

Although Ludogorets remained in control of their own destiny, the dismissal of Manuel Cafumana on a second yellow card in the 52nd minute offered additional incentive to their hosts.

As the action wore on, Bradley looked towards his bench for inspiration and the increasingly-promising Emakhu delivered in spades.

Getting on the end of a delicate pass from fellow substitute, Neil Farrugia, the 18-year-old increased Rovers’ lead on the night to two goals with as many minutes of normal time remaining.

While this heaped pressure on Ludogorets, Souza ensured they were the ones to advance to face Dinamo Zagreb in the next phase of the Champions League qualifiers.