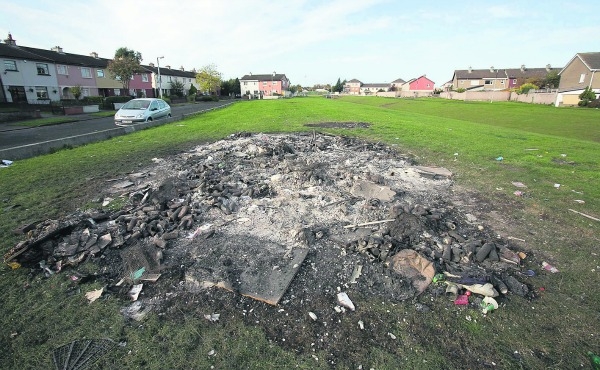 DUBLIN City Council spent close to €30,000 on the Halloween clean-up in the Dublin South Central area.

In total, an estimated 150 tonnes of waste and bonfire material was removed over the Halloween period by council staff.

Authorities say this “significantly reduced the potential for substantial bonfires to occur in the area.”

In the week leading up to Halloween, the council’s public domain unit and housing staff built up intelligence and information concerning stockpiling of material across the area.

Gardaí assisted council staff using trucks to remove material on at least two occasions prior to the Bank Holiday Monday.

Two places where the greatest volume of bonfire material was collected was Davitt Road, Drimnagh (14 trucks and two bin lorries) and Liffey Gaels GAA pitches in Ballyfermot, where a substantial amount of tyres were located.

In total, the council spent €29,154.39c on the Halloween clean-up in Dublin South Central.

Speaking at the Dublin South Central Area Committee meeting on Wednesday, Sinn Féin councillor Daithí Doolan said: “Nearly €30,000 was spent on the Halloween clean-up in Dublin South Central. A total of 150 tonnes of waste and bonfire material was removed in the weeks running up to Halloween night.

“I want to congratulate city council staff and gardaí for the excellent work done in the build-up to Halloween. Major hauls were at sites in Bridgefoot Street, Grand Canal Place, Davitt Road, St Teresa’s Gardens and Liffey Gaels GAA pitches in Ballyfermot.

“Money spent on this work is money well spent. Dublin City Council worked very closely with gardaí and local residents. This ensured that we had a quieter, safer Halloween night than in previous years.”