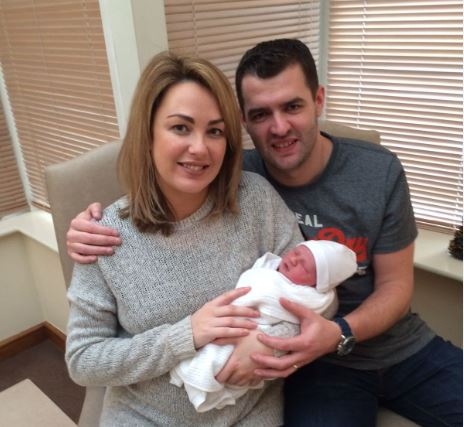 A LOCAL couple has started the New Year on a joyous note, after their son Cian was one of the first babies born in 2018.

Little Cian was the first baby born in the Coombe, with his parents Gareth and Christine O’Leary, who live in Firhouse, welcoming their beautiful baby boy at 1.41am.

Weighing 6 pounds and 8 ounces, newborn Cian was right on time, with dad Gareth telling The Echo that his son was due on January 1.

Speaking with his local paper from the Coombe, Gareth said: “We’re so excited, we’re both thrilled.

“Cian is our first one so, he’s probably expecting to be spoiled.”

When asked how mammy and baby are doing, Gareth said that “the two of them are flying”.

Congratulations to Gareth, Christine and baby Cian from all here at The Echo!