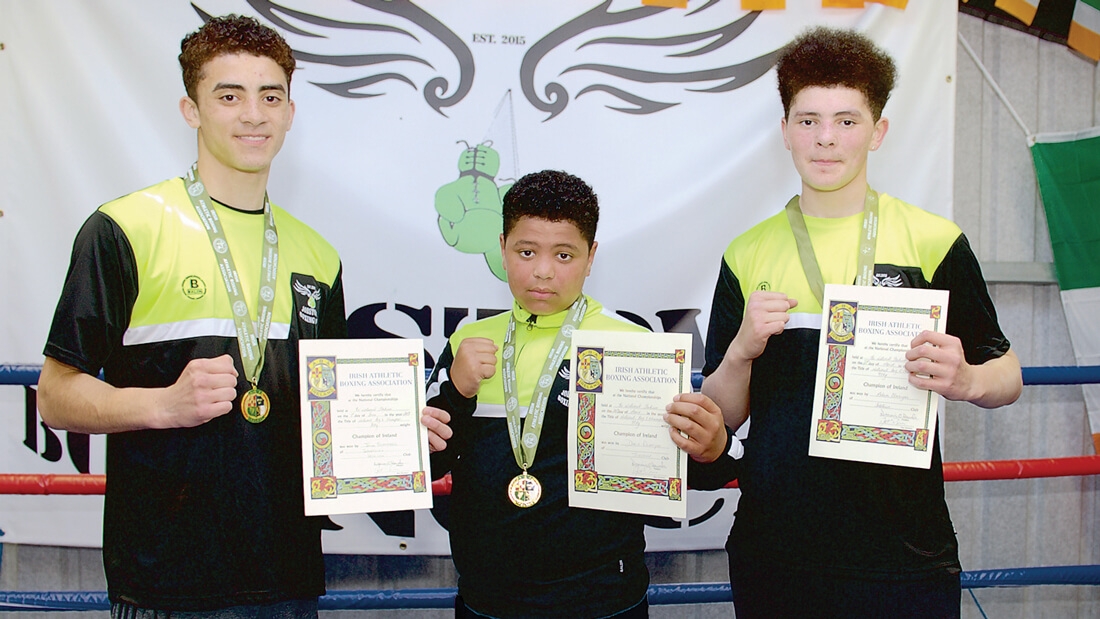 Hat-trick for Olaniyan brothers and Jobstown

IT WAS a hat-trick for the Olaniyan brothers and Jobstown Boxing Club at this year’s National Championships.

Having seen his siblings David and Adam previous-ly land the Boy One 85kg and Boy Two 95kg titles respectively, Josh Olaniyan followed suit on Friday with a unanimous victory over Martin Keenan of Leeside Lough in the Boy Four 70kg decider at the National Stadium.

Missing out on the national title last year having gone all the away at Boy One and Two degree in previous seasons, Olaniyan was determined to bring home the All-Ireland prize again this time around.

Despite competing in the midst of his Junior Certificate exams and having sat three tests the very day of his All-Ireland decider, the Tallaght lad demonstrated great physical and mental strength to complete his march to the title in such a convincing manner.

“Josh is not a brawler and he picked his shots with lovely turns and hooks” said Jobstown coach Amanda Spencer.

“He’s a pure boxer, very skilful and just kept picking him [Keenan] off. His opponent was coming forward a lot, but Josh didn’t give him the fight that he wanted.

“Josh had an off-season last year and lost his title, but he came back determined to win it back. He certainly had that hunger” she added.

His win took Jobstown’s National title tally this season to five with Sieana Fitzpatrick (G1 41kg) and Stacey O’Connor (G2 31kg) having won out in their respective finals in the Girls Nationals earlier in the season.

Josh and his two brothers will be among the panel of 14 from Jobstown who will contest the ‘King of the Ring’ Tournament in Sweden in November and the former is no stranger to this event having won the ‘Best Boxer’ award out of a field of some 500 just two years ago.

The club is on the lookout for sponsorship to help subsidise this trip and anyone willing to help can contact Amanda at 085 7426862.