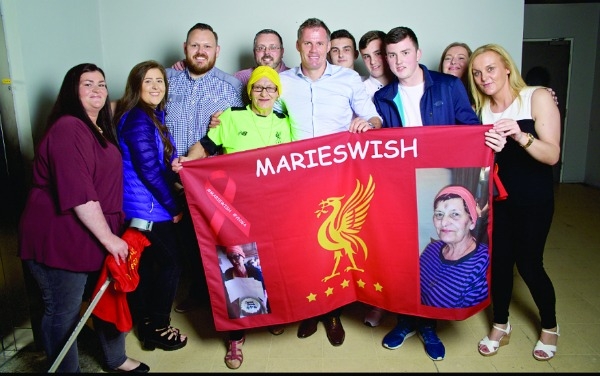 DREAMS do come through it seems, after a terminally ill grandmother enjoyed a first ever trip to see her beloved Liverpool FC.

Marie Wright (67), from Cleggan Road, Ballyfermot, was diagnosed with lung cancer in February, and initially given weeks to live.

A Facebook campaign by her family to get her to Anfield, was met with a staggering amount of goodwill in the community.

Within a week of an appeal featured in The Echo, the family had secured matchday tickets, the use of a wheelchair, a carer, and a weekend itinerary in Merseyside, courtesy of Dublin Reds fans, with the D15 supporters club prominent in their support.

Marie, and 13 of her family, travelled over to Anfield on September 10, to see the match against Leicester City.

The feisty grandmother is now being dubbed a lucky charm by fellow supporters, after seeing her heroes thump the current league champions 4-1.

“It was a great weekend, we’re so grateful to everyone who made it possible, it’s made us really happy,” said Marie.

“Walking into Anfield was so special and hearing You’ll Never Walk Alone, made me cry, even again the day after the game when we went on a stadium tour.”

Thanks to the Liverpool Foundation, Marie was overcome with emotion as she met Jamie Carragher, Ian Rush, Robbie Fowler and Gary McAllister.

She has vowed to keep fighting her illness, and hopes this inspires other people to keep going through difficult times.

Marie’s daughter Janice, thanked everyone who made the trip happen, especially “the Irish Reds and D15 LFC group, without who it would never have got off the ground.”

The family were inundated with offers during the weekend, but had to turn some down, so as not to “wear Mam out.”

“As our Mam faces her next chemo, I pray for one more wish,” said Janice.

“I ask you keep our Mam in your prayers, as I believe in the power of prayer and prayer for healing.”