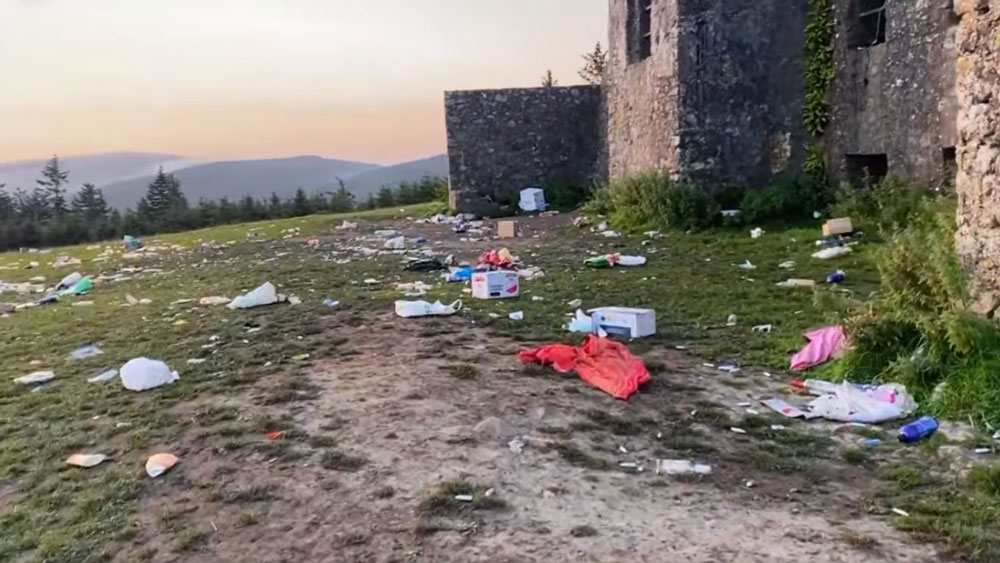 THIS was the scene that greeted visitors at the Hellfire Club last weekend.

Glass bottles, cans, plastic bags, cups, gas cylinders, were littered across the historic and environmentally significant site as the sun rose over the city on Saturday morning.

According to volunteers who cleaned up the mess, those who gathered for a party on the Friday night, definitely did not #LeaveNoTrace.

Littering at the Hellfire, people leaving masks, coffee cups and the remnants of picnics, increased during lockdown.

However, Elizabeth Davidson, of Save the Hellfire Campaign and the Hellfire Masseys Residents Association, told The Echo that littering levels have started to drop, as restrictions ease.

Describing last weekend’s scene as an “exceptional mess”, Ms Davidson noted the positive, stressing how members of the public arrived at the Hellfire on Saturday and Sunday to help clean.

“What happened last weekend was a bit of an exceptional mess,” Ms Davidson said.

“One positive is the great co-operation of members of the public, who saw images online and came up randomly with a bag to help clean.

“It finished up all good really… and shows how much most people care [about the Hellfire].”

Ms Davidson said volunteers took it upon themselves to clear the area as the party rubbish left behind could have posed dangers to people and animals.

What happened last weekend was, as Ms Davidson said, an “exceptional mess”, a mess that hopefully won’t be repeated.

However, volunteers believe that, in general terms, bringing home your rubbish is a message that needs to be worked on.

“We need to educate people to take away their rubbish,” she said.

“We wonder whether the Leave No Trace slogan’s not making an impact.

The Residents’ Association created their own, unique posters in recent days to remind all visitors to bring home their rubbish.

“We’re just highlighting the issue in a humorous way, we’re not sure how long the posters will last!,” Ms Davidson said.

The Echo contacted Coillte, which removed the bags of rubbish collected by volunteers and members of the public last weekend.

“In relation to littering in the Dublin Mountains [last] weekend, Coillte was made aware of the issue over the weekend and local Coillte staff collected large amounts of litter on Saturday,” a spokesperson for Coillte said.

“We are aware that local and volunteer groups also collected large volumes of litter in this area over the weekend.

“This litter has subsequently been removed for disposal by the PURE project team.

“Coillte ask the public to be vigilant and report any suspected cases of illegal dumping to the authorities.”

When asked about initiatives to deter littering at Coillte managed sites, the spokesperson said: “Coillte has an open forest policy and welcomes visitors to its forests according to the Leave No Trace Principles.

“Since the onset of Covid-19 there has been a large increase in the numbers of visits to Coillte forests.

“However, in some areas there has also been an increase in littering and illegal dumping on Coillte lands.

“In order to deter littering and illegal dumping Coillte has installed CCTV cameras and signage in a number of hotspots.

“In addition, Coillte work closely with gardai and local authorities to deal with issues of this nature.

“Coillte also participate in a number of community and local authority initiatives to address littering and illegal dumping.

“The largest such initiative is the PURE project (Protecting Uplands & Rural Environments) which aims to combat littering, illegal dumping/fly-tipping in the Wicklow/Dublin uplands.”