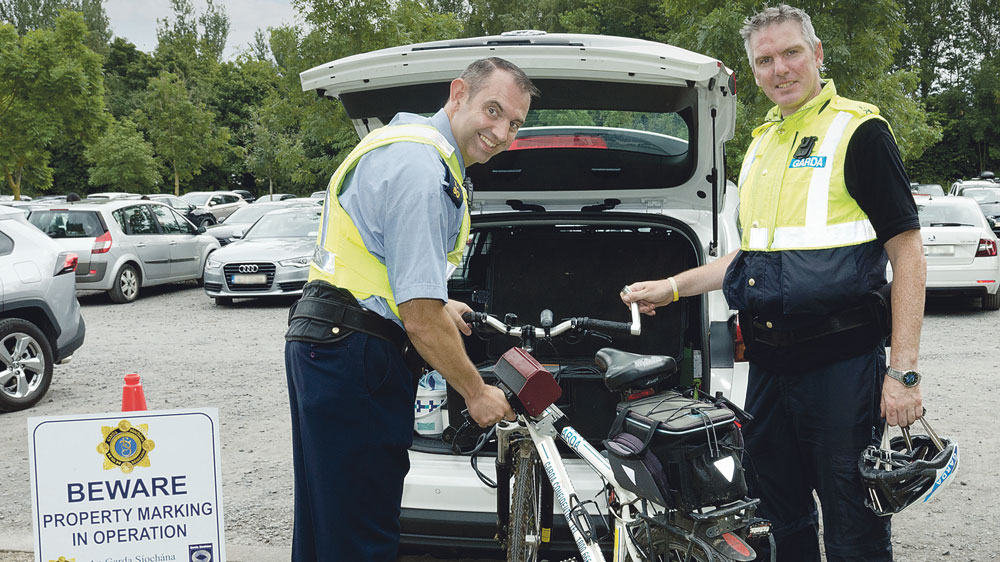 GARDAI held a Property Marking Weekend in Clondalkin to raise awareness of an additional method in the fight against theft.

The property-marking machine can engrave your personal Eircode number onto mostly anything, including bicycles, laptops and mobile phones.

“We have had a load of bicycles recovered in recent times, and can look at them to see if there is an Eircode. Then we can contact the address and ask was the bike reported stolen,” said Clondalkin Community Garda JJ Walsh.

Garda Walsh said the Eircode number is ‘nothing to do with the garda database’, but the application can have a positive impact on policing efforts to return stolen goods to victims of theft.

This is particularly helpful when one considers the high cost involved in buying new bikes and mobiles these days.

“It can help in recovering a number of bikes, or any mobiles, tablets, golf clubs, any small thing can help,” said Garda Walsh.

“Visible engravings on a bike frame can be scratched off, but we can put the number on discreetly, underneath the saddle of a bike. It comes up very small on a mobile, you wouldn’t even see it, but if we recover a stolen phone and examine it, we will find it. The colour white is brilliant for this.” 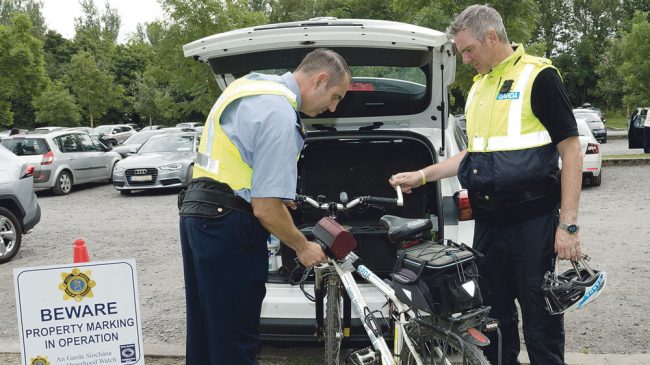 The property marking machine for awareness events by Clondalkin gardai over the weekend, was borrowed from the Irish Farmer’s Association.

In recent years, it has been used by Irish farmers to combat increased theft of farming machinery around the country.

Engravings on farming equipment can be etched underneath machinery or in areas which will become mud splattered and so remain hidden.

The event over the weekend was held at two locations – the Grand Canal (Fonthill Bridge) on Saturday, and Corkagh Park on Sunday.

“There seemed to be a bit of interest and we are hoping to do it again. The machinery is expensive but we will see if we can hold onto it for three of four days and do a blitz in places like Corkagh Park and local community centres, at different times.

“Evening times might suit some people better. We can do it anytime, but we want to do it at a time when it suits people.”