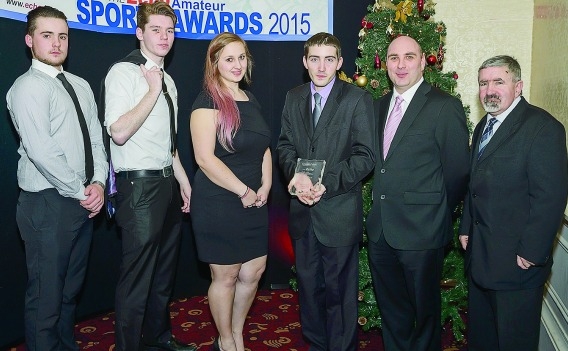 ’Hills are alive with the sound of progress

ARCHERY might well be regarded as a minority sport in this country, but try telling that to Greenhills Archers who, over the past year, have taken huge steps to bring it to the masses in the Tallaght community.

Indeed in just 18 months, membership of the club has tripled to almost 150 as the club continues to introduce the sport to quite a number of schools around the community.

Under the leadership of Vice Chairman Adam Banks, Greenhills have seriously developed their juvenile section and begun to produce some very impressive young competitors who could someday scale great heights.

What’s more, Greenhills have been developing their outdoor range in Tymon Park and are striving to get bigger and better.

It therefore came as little surprise to see them take ‘The Echo 2015 Club Development of the Year’ Award at last Thursday’s Presentation Gala Night in the Green Isle Hotel.

When asked about the club’s progress and what it has been founded on, Greenhills Archers Chairman Christy Banks was unequivocal in his response.

“We have a very good team running the club” he explained.

“It would be unheard of for one person to run a club the size of ours and we have an 11-strong committee with key people in the right places.

“It’s the hard work and dedication of these people, not just the coaches, but everyone who does all the time-consuming and boring jobs, that make this club what it is.

“There’s a climate of openness and friendliness there that has really paid off.

“We have people from as far as Ashbourne and Wicklow and all around Dublin who are now members and coaches wanting to join the club and that’s a really great compliment for us.

“We have three major competitions throughout the year- the Leinsters in February, our Beginners Shoot in June and in September our Anniversary Shoot which, this year, involved 76 seasoned competitors and ran over two days.

“Now we’re looking to get even bigger and better and open up even more” he insisted.

Having seen the club scoop accolades at the Tallaght Person of the Year and The Echo Sports Awards over the past month, Greenhills’ Adam Banks said “We’ve taken awards all over the place and it’s really good to see because a lot of real hard work has gone in to all this.”