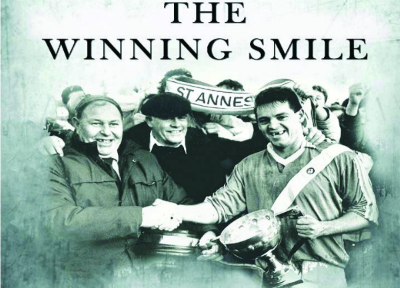 The history of St Anne’s GAA club – The Winning Smile

THE GAA is one of the pillars of Irish society and of South County Dublin, and St Anne’s GAA club in Bohernabreena is one of Dublin’s most prominent clubs. Club member Dermot Mara has now written a history of the club entitled The Winning Smile.

A year in the making, A Winning Smile came about when Dermot was asked to write the book by a fellow club member.

Dermot told The Echo: “I was at the funeral of a club member last year and afterwards we were having a chat and somebody said that no-one had ever written a history of the club. Someone suggested that I do it, so I took up the challenge.”

Dermot documents how St Anne’s has grown and developed. Producing All-Ireland medallists, the club continues to nurture and inspire the youth it serves.

The front cover shows one of the club’s proudest moments from 1989 with Ger Heaslip being presented with the Leinster Division 1 cup by Phil Markey, with Eustace “Rocker” O’Growney between them.

The book will be launched tonight (Thursday, December 17) in the club by former GAA President Sean Kelly MEP, who is travelling specially from Strasbourg for the occasion.

The Winning Smile is available from St Anne’s, Bohernabreena.