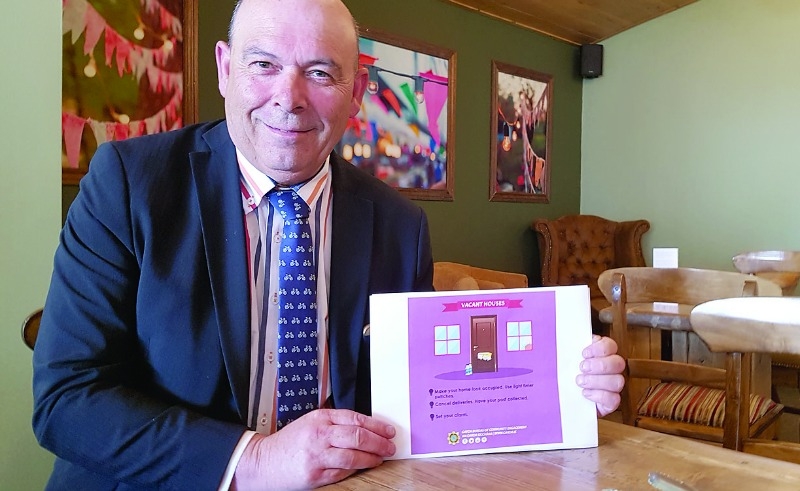 HOME-OWNERS have been advised not to post information about their holidays on social media, as burglars start their summer season of scouting for empty houses.

Crime prevention officer Mark Redmond has this week reminded people to be mindful over the coming months and to take precautions to ensure their homes are secure and safe while away on holidays.

According to Garda figures, the number of burglaries reported in Tallaght so far this year are down 18 per cent on the same six-month period last year, with numbers dropping from 179 to 146.

However, according to Garda Redmond, while burglaries may be down, the summer season brings with it a new type of crime, as criminals scout areas for homes that have been vacated for summer holidays.

“The main message here is: if you’re going on holidays try and eliminate the signs that no-one is home,” Garda Redmond said.

“Crime changes with the seasons and during the months of July and August particularly, criminals are watching homes to see who is away.

“We’re asking people to remember the little things like locking all doors and windows when they go away, use a light timer and set their alarm.

“It’s also important that people let their neighbours know they are away and ask somebody to collect junk mail and post from the porch.”

He added: “We’re also asking people to not post about upcoming holidays on social media and don’t share pictures while away or tag other people in them.

“Don’t advertise that you are not home.

“Also, tidy your garden before you head off. Cut your grass and prune trees and shrubs so that your house is visible.”

While burglaries are down, Garda Redmond said that shed break-ins are on the rise with bikes and tools being the main items stolen.

“We would encourage people to mark their property and to take note of serial numbers so that we can get items back to the owners if found,” Garda Redmond said.

“Also, over the summer, when people are home, the windows and doors tend to be open, so we are encouraging people to not leave valuables such as keys and wallets lying around in full view.”

Garda Redmond, who is issuing the summer season appeal in conjunction with the Garda Bureau of Community Engagement, is available to meet with individuals or residents associations in relation to crime prevention.