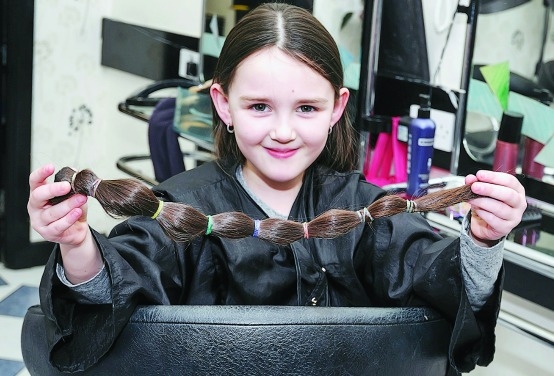 Holly proves that she’s a cut above the rest

A FIRST-class student from Lucan shed her lovely locks for charity this week – proving herself to be a first-class citizen.

Holly Reid (7), from Foxdene, Balgaddy, was moved to do something for those in need after seeing a young girl suffering from cancer on television over Christmas.

The youngster managed to raise €500 for charity over the last month, and went under the shears on Wednesday at Shell’s Styles in Clondalkin Village.

Proud mother Sarah Byrne the family are “shocked but delighted” with the goodwill gesture.

Sarah said: “During Christmas week, Holly saw a young girl without hair, who had cancer, on RTÉ news. So this led to an inquiry, and we explained why, and Holly said she wanted to give something back. We’re very proud of her. Her daddy (Andrew Reid) needed a bit of persuading, but we told him her hair will grow back.

“We looked into it and found charities she could do something for. Holly raised €230 for Irish Cancer Society and €270 for Aoibheann’s Pink Tie. They won’t recognize her when they see her in school at Divine Mercy Senior NS. It’s only her second haircut.”

Staff at Shell’s Styles cut 18 inches off Holly’s hair on Wednesday, and will present it to the Rapunzel Foundation.