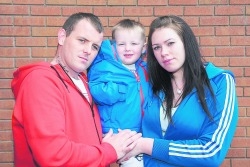 A COUPLE from Tallaght have been forced to find shelter in Tallaght Hospital’s emergency department, where they’ve sat all night with their two-year-old son because they have no place to sleep.

Nadine Heffernan (21), her partner Patrick Dunne (25) and their two-year-old son Kayden have been on the council’s housing list for 18 months, during which time they were staying with a family member and more recently on the couches of friends.
Nadine told The Echo that some nights when they can’t locate a couch to sleep on, they have been forced to bring their two-year-old into Tallaght Hospital’s A&E department – where the family go to find shelter.
Nadine said: “We have been attending South Dublin County Council’s homeless unit and even though the staff have been very nice to us, they can’t do anything to help – there are no beds available anywhere.
“This week, we were told by a staff member to cancel any welfare payments that we were on – which would allow us to legitimately go onto the homeless list [if a person is registered homeless with no fixed abode, they cannot avail of certain social welfare payments and allowances].
“We cancelled Patrick’s weekly payment on Tuesday [confirmation of which The Echo has seen] but when we went back to the council, we were told that they still had nothing – so, at that point we had no roof over our heads or money coming in.”
Nadine added: “The three of us were staying in my mam’s boxroom for a while and some friends and family members have been really kind and are letting us sleep on couches – but this is really confusing for our son.
“There is no stability in his life except for his crèche in Jobstown, which we bring him to everyday.
“He loves it but after crèche finishes at 12 o’clock, he’s brought to the council offices or into The Square – we have nowhere else to go.
“If the weather’s good, we bring him to the park – this helps to keep him grounded.
“Over the weekend though, we couldn’t find anywhere to sleep, so we had no option but to bring our son into Tallaght Hospital’s A&E and sit quietly with him while he got some sleep.”
Nadine and Patrick told The Echo that they are meeting families in similar situations every day.
Patrick said: “We’re not looking for much, we just need a place to put our heads down for a couple of nights and are happy to stay in emergency accommodation.
“Our lives are unbelievably hard at the minute, we have nowhere to cook, to wash, to sleep – we’re desperate.
“Every day is spent trying to find somewhere to sleep that night and with so many people homeless at the moment, it’s hard to see a better life for the hundreds of families in the same boat.”
South Dublin County Council did not reply to The Echo’s questions.
However, they did confirm that as of March 31, 266 housing applicants were included on the council’s Homeless Register, all of whom are currently placed into Temporary Emergency Accommodation, Supported Temporary Accommodation, Private Emergency Accommodation, aftercare or women’s refuge.

NEWER POSTTwo local properties on market for €10,000,000
OLDER POSTThree applications for over 70 houses in Lucan