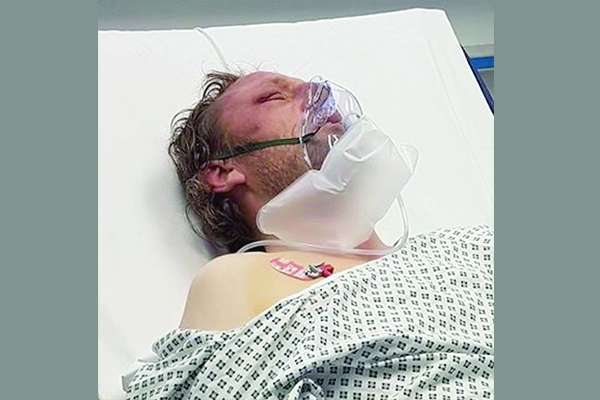 A HOMELESS man was hospitalised with a punctured lung, fractures to his face and extensive bruising to his body after he was violently beaten while sleeping on a bench in a Tallaght park.

This week the community of Tallaght united in expressing upset and anger over the senseless attack on 42-year-old Philip Doyle, who was set upon while lying in his sleeping bag on a bench in Dodder Park either late last Wednesday night, May 25, or the early hours of Thursday, May 26.

After the beating, Philip, who was diagnosed with schizophrenia when he was 23, was left “alone to die” in an isolated location beside the new footbridge that stretches over the Dodder.

However, his sisters told The Echo that their brother managed to make his way through the park at some stage that morning and out onto the Seskin View Road, where he met a group of school children who called an ambulance.

His sister Sharon, who lives in Avonbeg, told The Echo: “We’re heartbroken over what happened to Philip. How could anyone beat him so badly and just leave him alone to die?

“We live in fear of this happening to him and we hope that whoever carried out this brutal and frenzied attack is caught.”

She added: “For the past two years Philip has been staying close to his family here in Tallaght and while he won’t stay with any of us, he feels safer knowing that we are near.

“We’re always worried about Philip, worried that he is hungry or wet. Worried that we’ll get a phone call that he has been hurt or worse.

“Because he stays around we can go out looking for him and people in the area keep an eye out for him too, he’d be a familiar face around.

“The community here in Tallaght is brilliant, people look out for each other and so many people have been kind to Philip – their kindness is the reason he’s still here.”

Three years ago Philip lost his council flat in Tallaght because of his vulnerability and the use of his home by others for drinking and partying.

Philip, who is recovering from his injuries, was this week transferred to a psychiatric unit in Tallaght Hospital, but his family are worried about where he will go once released in a week or two.

“Philip has mental health issues and is a vulnerable man who has been abandoned by the state,” Sharon said.

“Philip and others like him have been let down by the system. Philip can’t get social welfare because he has no address, he can’t get a medical card because he isn’t in receipt of social welfare and he hasn’t got the capability to go to the council every day to declare himself homeless in the hope of getting a bed for the night.

“However, they are still human beings and still have rights.

“Why do people have to conform to have rights? Philip and all of the other homeless people with mental health issues have a right to their social welfare and a right to somewhere safe to sleep.

“The prison service, hospital, council, social welfare office and other services have all said that Philip basically doesn’t come under their remit. They keep passing him on.

“Where do all of the homeless people with mental health issues fit? Nowhere.

“A focus needs to be put on accessible, independent and supported living options for people like Philip, otherwise his life will continue to be in danger.”

Philip’s family alongside Gardaí at Tallaght are appealing to anybody with information on the attack to come forward.

Tallaght Superintendent Peter Duff said: “We are investigating an alleged assault on a man from the Tallaght area and are in the process of getting CCTV from the area and surrounding locations.