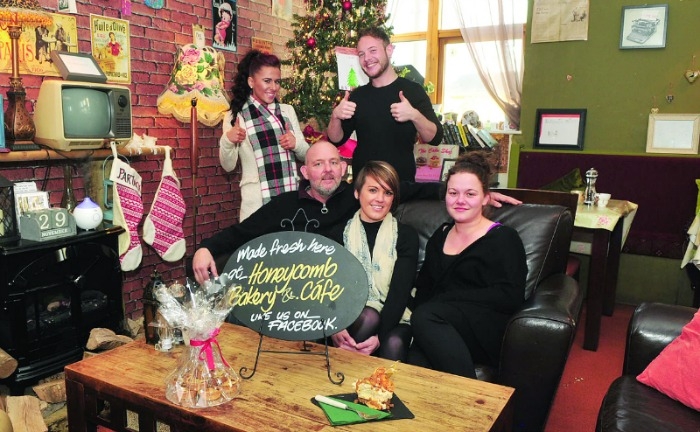 Honeycomb Café creating quite a buzz in Clondalkin

OPERATING a little under the radar is the very interesting Honeycomb Bakery and Café in Clondalkin.

While the café has been open for a number of years and has a steady base of customers, the premises at Bawnogue remains one to explore for many in the wider community.

The café is under new ownership in the last few weeks – chef Paul Quinlan and his wife Liz took it over as a going concern when the previous owner fell ill, but feel the location and café has “great potential.”

The couple has invested €10,000 in refurbishing the premises – while retaining the quirky décor the Honeycomb is synonymous with.

After introducing a number of new features to the menu, including slow-cooking their own ham for six hours, the next step for the Quinlans is to grow the clientele base.

“There was nothing bad about it before, we have just put our own twist to it, brought up the standard, making it seasonal, fresher, healthier, and are trying to get the word out,” said Paul.

“Weekends are always busy, but it is about trying to increase the foot traffic during weekdays.”

With over 20 years experience in the industry, Paul sees the Honeycomb as something more than just a simple eatery – providing catering services to businesses, clubs and organisations, another element to the business model.

Employing 10 people, the Honeycomb encourages customer feedback – requests for better coffee resulted in the purchase of a quality coffee machine.

“We use social media to test the waters, ask people if they think it’s a good or bad idea,” said Paul.

“We are trying to keep the prices down, which is another thing we learned, and will be doing deals for a coffee and scone, and little bites.”

The Honeycomb have over 11,000 followers on Facebook, and this week, asked customers if they want the place to open on Christmas Eve.

Paul continued: “A big thing at the moment is our signature honeycomb cheesecake, with Toblerone, honeycomb in cake mix, ginger snaps and white chocolate. We are making up to 100 of them for Christmas. Customers pre-order them.

“Breakfasts are very big, and account for up to 60 per cent of what customers buy. But we also have healthy options, and sell candles, cups, plates. Developing the business is like making your own recipe.”