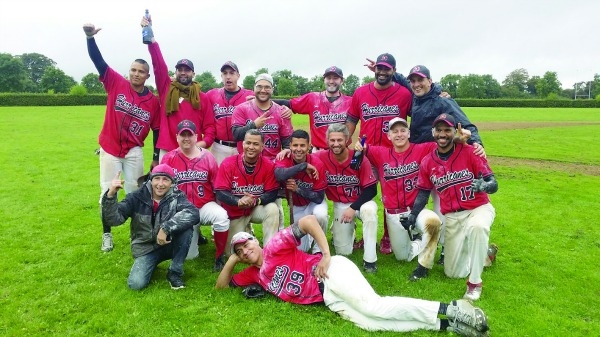 THE DUBLIN City Hurricanes were crowned Baseball Ireland champ-ions for the second year in a row in Corkagh Park on Sunday, as they swept their two-game series against the Greystones Mariners 15-5 and 11-3.

It was a return to dominance for the Clondalkin-based team, after suffering their first regular-season defeat in three years in the closing weeks of the season to their Wicklow opponents.

The Mariners, buoyant after seeing off the Dublin Spartans in their semi-final series, were unable to match up to the stellar pitching of Alejandro Guerrero in Game One and William Pena in Game Two.

The Hurricanes’ bats came to life early on, especially those of joint Series MVPs Kelvin Almanazar and Frank Prieto, who combined for a staggering 10 hits from just 16 attempts, batting in 12 runs.

Meanwhile The Dublin City Hurricanes’ B Team won their regional championship last weekend, and will advance to play the Belfast Northstars in the grand final of Baseball Ireland’s second tier.