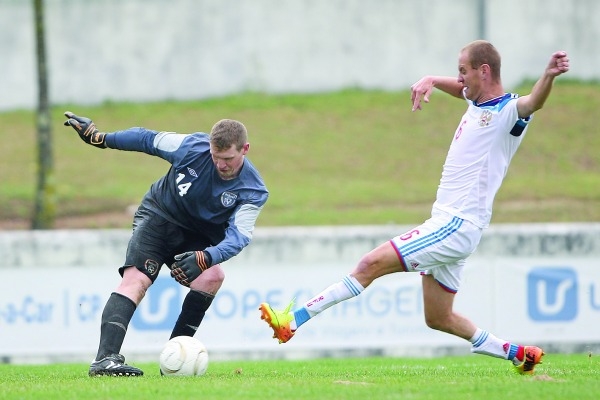 No excuses are made by Ireland keeper McGillivary

IRELAND’S goalkeeper at this month’s Paralympic Games, Brian McGillivary made no excuses for the team after what was always likely to be a tough campaign that saw them lose all four of their matches.

The Firhouse man, who has now retired from the game, insists that, for whatever reason, the team was not at its best when they came up against world-class opposition in the likes of Ukraine and Brazil in the group stages in Rio.

Probably more disappointing was the fact that they fell short in games they would have targeted at the start of the tournament against Great Britain and later, the seventh place play-off against USA which they lost 2-1, Ballyfermot’s Dillion Sheridan accounting for their only goal on that occasion.

“We were beaten by better teams and that’s what it comes down to. We didn’t perform and there’s no dressing that up.

“There were a handful of lads there who did their job and the rest didn’t.

“If every one of the players had done their job would the results have been different? I’m not so sure. The scorelines would have been closer.

Still McGillivary remained upbeat about the prospects for this squad saying: “If they can keep one or two of the older heads and bring some of the young lads through, they can do well.

“The likes of Dillon Sheridan is a class player. Not many players can say they scored against Brazil and the USA in the Paralympics, but he can.

“If they can hold on to him that will be great for the team,” he stressed.

McGillivary remains involved in the sport coaching both the Under 14 and Under 17 teams in Firhouse Carmel.

It was a disappointing end [to his career] but looking back overall, it’s been great “ said the Tallaght man.

“I’ve been to two Paralympics and won a European bronze medal” he added.

ON another note Tallaght’s Ciara Staunton was also in Paralympic action in Rio and finished 14th in the H2-4 Road Race the day after she had taken 11th position in the H2-3 Hand Cycling Time Trial.