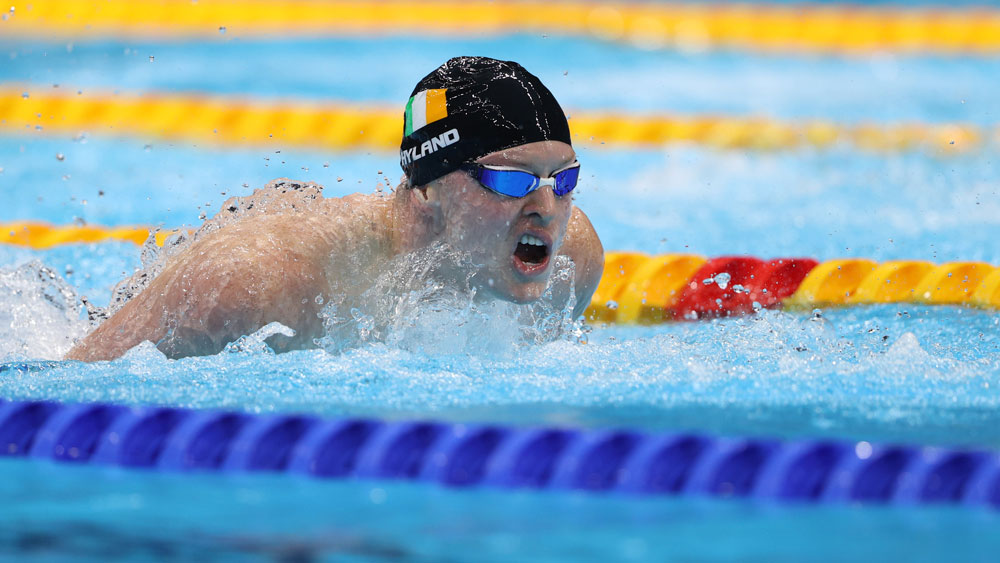 Tallaght and National Centre swimmer, Brendan Hyland, on his way to a superb third place finish in his heat for the 200m Butterfly at the Tokyo Olympic Games today.

BRENDAN Hyland served up a very impressive performance to finish third in his heat for the Men’s 200m Butterfly at the Olympic Games in Tokyo this morning, clocking a fine time of 1:57.09, just over half a second outside his Irish record and the fastest he has gone all season.

The Tallaght Swim Club and National Centre competitor produced a strong start from Lane Three, making the first turn in fourth place in 26.12 seconds before hitting the midway mark at 55.7 for third position.

Finding himself in sixth place at the final turn, the Knocklyon man really lit up the burners over the closing 20m to touch home in third, pipping India’s Sajan Prakash to the wall.

For Hyland, who had received a FINA B invite to the Olympics on the strength of his Irish record time of 1:56.55 that he registered at the World Championships in South Korea back in 2019, it marked a tremendous Olympic debut.

While not enough to see him through to the semi finals as he finished 23rd overall in this event, he will be very encouraged ahead of taking to the blocks for the heats of Men’s 4x200m Freestyle Relay in which he will team up with compatriots Jack McMillan, Finn McGeever and Shane Ryan tomorrow.