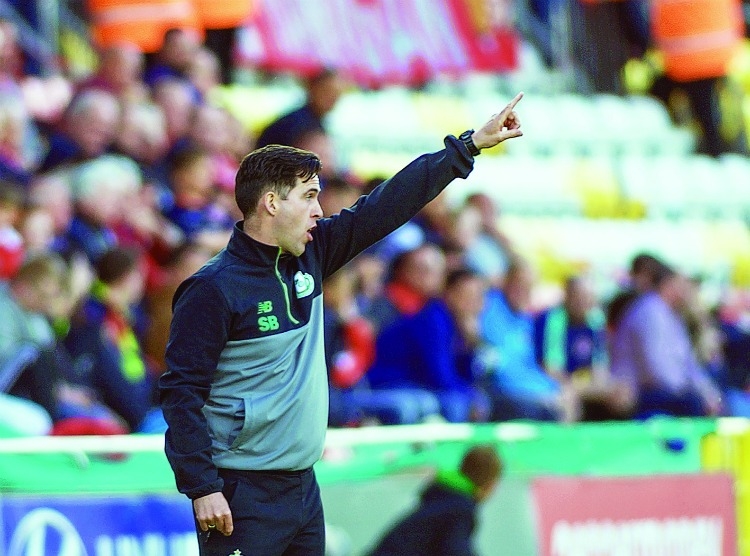 ‘I believe in our philosophy’ – Stephen Bradley

SHAMROCK Rovers boss Stephen Bradley is sticking to his guns in his bid to make the Hoops the most attacking force in the Airtricity League.

The Tallaght man is standing by his side’s ‘all or nothing’ approach to games that has seen them improve markedly in the second round of their Premier Division campaign.

“We play to win every game, so you don’t see us drawing too many. It can be all or nothing with us. We either win or we lose.

“But it’s a philosophy that I believe in and, as the players get to know each other more and get that experience of playing with each other more, we’ll keep getting better.

“There are times when you do have to manage games for five or ten minutes and that is an area that we could improve on, but that comes from the players being around each other for a long time.

“We’re already doing that [improving game management]. We have more points in this round of games than we did in the first and we still have four matches to go.

“We’ve scored in nearly every game we’ve played. Most teams don’t create the amount of chances that we do.

“Can we put more of them away? Of course we can. We could be more ruthless in front of goal.

“We could also improve more defensively as a team. Against Cork we conceded four goals but three of them came from set pieces so that’s a team issue. We have to do better as a team”.

“I believe in this group of players. They’ve got strong character and they’re really good professionals. We’ve shown that like when we got beaten by Cork we came back and beat Bray.

“We’ve got about four games left in the second round of fixtures and we’ve got to go and win as many of them as we can. If the players continue the way they have been I feel we’ll be fine.

“We have our long term targets and we’re going to hit them” he insisted.

The Hoops’s only draw in the second round of Premier Division fixtures so far came on Friday night when they finished deadlocked at one goal apiece with near neighbours St Patrick’s Athletic in Tallaght Stadium.

Graham Burke had edged the homeside in front after 17 minutes only to see them ship a Christy Fagan equaliser ten minutes into the second half.

It denied them the chance to replace Bray Wanderers among the top four as they consequently remained one point behind the Seagulls in fifth.

“The lads were disappointed at the end of the match. It felt like a defeat” recalled Bradley.

“We should have finished off the game. We were the better team in the first half and I felt they were there for the taking.

“But sometimes it can happen that when you’re so dominant in the first half you feel like you can score at any time, but we didn’t push on and they got the equaliser.

“We were a bit complacent and I felt that the run of matches we’ve had caught up with a few of the lads and the energy levels weren’t there.

“But we didn’t lose the match and there was a point gained” he added.

Bradley will be hoping to see his side return to winning ways in the league when they travel to Finn Harps on Friday, June 16.