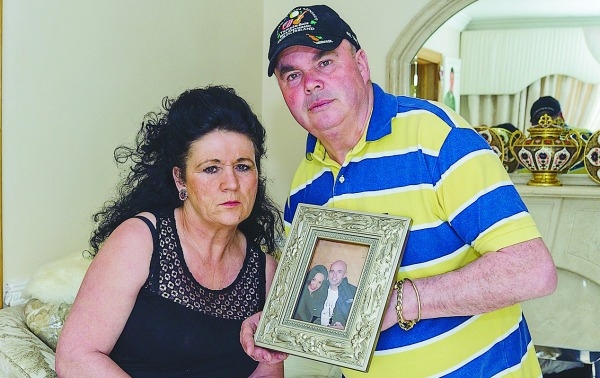 ‘I know who killed my son and his partner’ says dad

THE DISTRAUGHT father of a Tallaght man who disappeared with his partner a year ago has told The Echo that he knows they are dead and who killed them.

Joe Maughan told The Echo that his son Willie (34) and his 21-year-old partner, Anastasija Varsalavane, were killed by a gang in Gormanston, Co Meath in April 2015.

Mr Maughan said: “I know who killed them. The main suspect is locked up in Wheatfield at the moment. He’s a wannabe, a nobody. He’s a coward. He and the rest of his gang are just cowards. They are a pack of wolves. Wolves fight in packs. They are just cowards”.

Willie and Ana disappeared from Gormanston on April 14, 2015, just before his mother, Helen, was about to pick them up and bring them back to Tallaght. Helen raised the alarm when they didn’t show up.

Tonight there will be a Mass for Willie and Anastasija in the Sacred Heart Church in Killinarden.
Joe says he hasn’t been able to sleep properly since his son went missing.

He said: “People say heaven or hell. I don’t know where I have been for the past year. I can’t sleep at night. I see him in my dreams. I can see her (Anastasija) screaming for help. That hurts me in what they did to my son and his girlfriend, that they killed them.”

Joe added: “We know everyobody who was involved in my son’s murde. I want to make that clear.

“They were murdered in Gormanston. My wife went to collect them. At 2.25pm she spoke to Willie and said she would be there in 30 minutes.

“The phone then went off at three minutes to three.You could hear Ana crying for help”.

Joe told The Echo that his son was killed because he knew something about a shooting in Balbriggan.

He said: “Everybody knew about it. The rabbits in Gormanston and Balbriggan knew about it”.
He appealed to anybody who knows anything to contact the gardaí.

Joe said: “If anybody knows anything, just ring it in. Every little bit of information is important”.

Anastasija is of Latvian origin, but lived in Ireland for a number of years. Known as Anna, she is 5’6” in height, of slim build, with long dark hair.

She was known to frequent Balbriggan, Stamullen, Gormanston areas and was last known to be in the company of Willie Maughan. They were last seen between 2pm and 3pm in the Gormanston area of Co. Meath on Tuesday 14th April 2015.

Willie is described as 5’8”, of athletic build, with shaved head and green eyes. It is not known what he was wearing when last seen. He is known to frequent Balbriggan, Stamullen and Gormanston areas.

A Garda spokesman told The Echo that there had been no developments in the case.