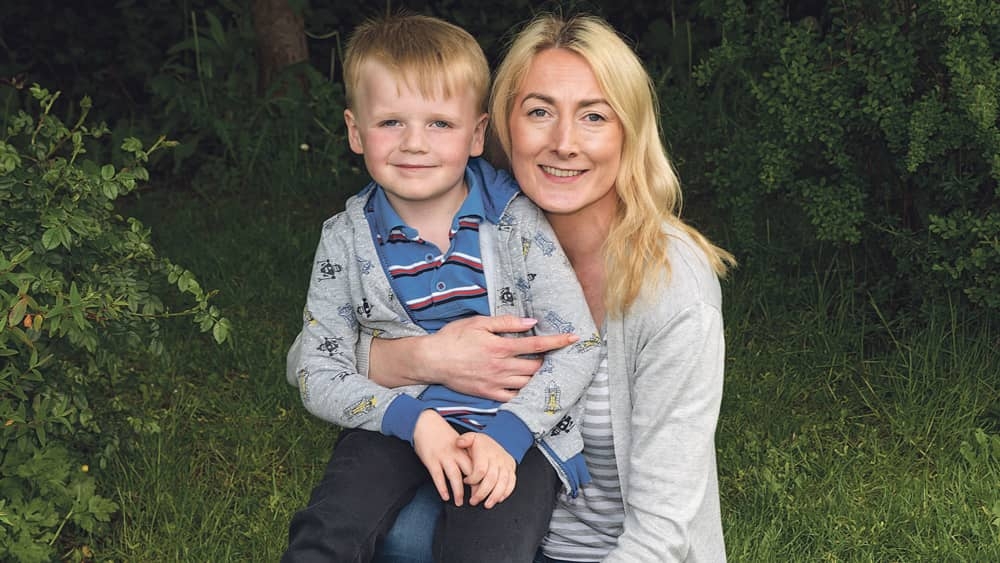 ‘I’m a person with MS, but MS doesn’t have me’ mam Naomi says ahead of World MS Day

NO TWO cases of multiple sclerosis (MS) are the same, “and nobody knows what anyone else is going through”, according to a woman with the neurological condition who is speaking out ahead of World MS Day later this month.

Naomi Donaldson, 39, from Rathfarnham, initially realised something was wrong when she started getting blurred vision in her left eye in 2007.

Evan and Naomi ahead of World MS Day on May 30

“I went to the doctor about it, and they told me to go to an optician,” Naomi told The Echo.

“The optician said they couldn’t see anything wrong with my eyes, and it went away after a while.”

In 2010, Naomi’s sister, Rachel, developed issues with her sight and was diagnosed with MS at age 21, and shortly thereafter Naomi’s blurred vision returned.

“I had the blurred vision again in my left eye,” Naomi explained. “Then, when I was in the shower I turned around and burnt my right arm because the water was so hot.

“I realised that I hadn’t felt how  hot the water was on my left arm at all.”

Naomi was diagnosed with MS at 29-years-old on May 14, 2011, and she said it was a relief as it finally offered an explanation for the problems with her vision.

Though Rachel and Naomi’s grandmother had MS, the sisters didn’t know much about the condition when they were diagnosed.

Naomi said: “Our grandmother died of MS in 1966. All we really knew was that she had it and then she died – but things have come a long way since then.

“When my grandmother was diagnosed, there was no treatment for MS. Whereas now, I’ve never had long periods missing from work, I’ve walked the Camino, I’ve had a baby.”

The last relapse that Naomi suffered was in 2013 during a period of high stress, which can worsen the condition, however the illness hasn’t progressed since then.

“I take a tablet every day and there’s been no new damage to my brain and spinal cord since the relapse,” she explained.

“The tablets have kept me completely stable for the past few years.”

But, Naomi is keen to stress that MS affects sufferers differently, as she has relapsing remitting MS, which means there are periods of stability between relapses, while her sister Rachel has secondary progressive MS, which means her condition will steadily worsen.

“No two cases of MS are the same, and nobody knows what anyone else is going through,” said Naomi, who works as a civil servant.

“Everybody has days where they feel sorry for themselves, but you can’t dwell on that, I think doing that makes you sicker.

“Myself and Rachel have walked the Camino, we’ve done white collar boxing.”

While Naomi said the fatigue she experiences as a result of the condition is like “someone has a hoover and is sucking the energy out of your feet”, she still maintains a positive outlook.

The theme for this year’s World MS Day, which will take place on Sunday, May 30, is connections, particularly building community connection, self-connection and connections to quality care.

“For me, being able to connect with other people who have MS has been unreal,” said Naomi, “meeting other people and sharing tips on how they cope with stuff.”

She added: “You shouldn’t go it alone. MS connections are hugely important.

“No question is a stupid question, if you’re wondering about something then just ask, and don’t suffer in silence. Get a good network of people around you.”

MS Ireland will be connecting virtually with people this World MS Day, when they will hold a virtual balloon race with 9,000 balloons – one for each person in Ireland who is living with the condition.

The balloons will be virtually launched from the MS Ireland Care Centre in Bushy Park on May 30 at 9pm and further information is available at ms-society.ie

Members of the public with any queries relating to MS are invited to call the MS Information Line on 1850 233 233 which is available Monday to Friday, 9.30 am to 1.30 pm, and all calls are strictly confidential.