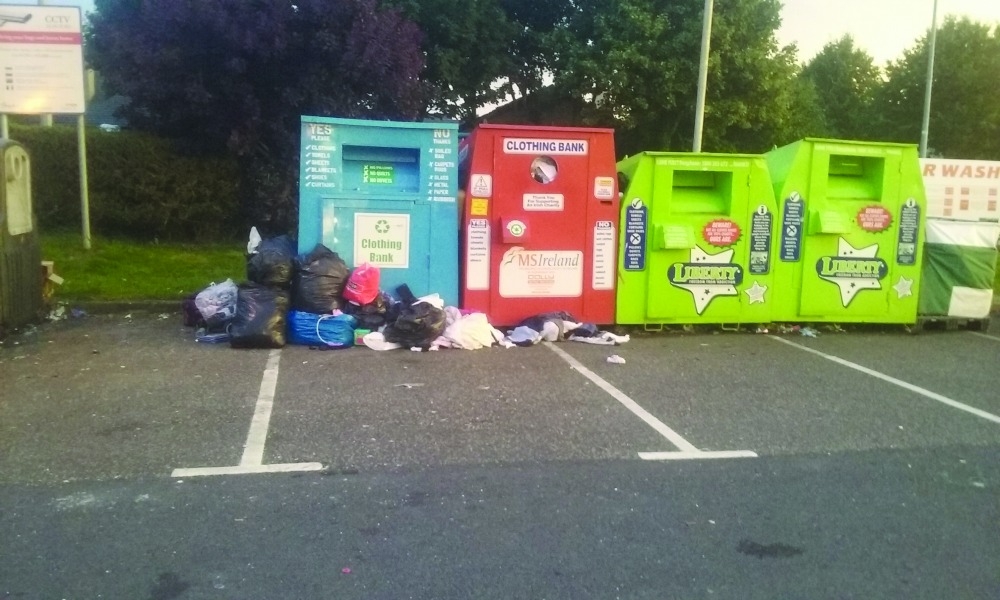 ILLEGAL clothes banks are a scourge across the country, but one local councillor feels local authorities need to be more pro-active in addressing black market activity.

In recent times, South Dublin County Council have removed unauthorised clothes banks from Corkagh Park in Clondalkin, and in Lucan at sites in Ballyowen Shopping Centre and Griffeen Road.

Sinn Féin councillor Danny O’Brien asked South Dublin County Council for a report on the number of illegal clothes banks in the county for 2015 and 2016.

In response, the council said they removed three units from Corkagh Park in 2015 as “no authorisation was provided for their occupancy.”

Subsequent correspondence between Cllr O’Brien and the council, revealed further illegal clothes banks were identified at Griffeen Road and Ballyowen Shopping Centre, a site which is a “big problem”, according to Cllr O’Brien.

Litter wardens found no name or contact number on a blue clothes bank at Ballyowen.

“People in the area are sick and tired of it,” said Cllr O’Brien.

“There is CCTV at Ballyowen, but there seems to be very little prosecution. There are over 70 bring centres located around the county, but it is hard to know how widespread the activity is. There is a huge black market industry out there.”

SDCC say they cannot instigate measures to remove textile banks on private land, but textile banks on council owned/controlled property without authorisation, are classified as illegal and can be removed.

This year, two units were removed from Sean Walsh Park in Tallaght, as contents were regularly removed and scattered on adjacent ground.

Cllr O’Brien continued: “Clothes are not classified as rubbish, but if you look at the US, they will fine people who put in unauthorised clothes banks. It is the same as a lot of the door-to-door leaflets asking for clothes donations, or people taking clothes to sell at charity shops.

“You can’t be sure where clothes are going. I’ve teenage daughters who might wear a top once, whereas kids also grow out of clothes, or people tire of them. I’d like to see the council be more vigilant in removing illegal clothes banks across the county.”