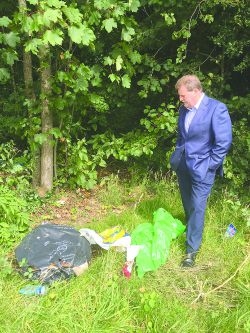 ILLEGAL dumping in south Dublin is getting worse, a local councillor has claimed.

Councillor Mick Duff told The Echo that illegal dumping is “a huge issue in the county and it’s getting worse”.
Cllr Duff said: “People have to see that the council are not an aid group and they have to take their own responsibility for dealing with their waste. You can’t expect your local council to be cleaning up for you.”

Last year, South Dublin County Council spent €3.2 million on cleaning and illegal dumping and €2.8 million on estate cleaning and litter removal. They also spent €880,000 on the litter warden service.
Cllr Duff told The Echo that he would like remind people and community groups that you can report litter or pollution incidents to the council. Cllr Duff said that he recently came across an incident of illegal dumping in St Aongus Crescent.
He said: “Last Sunday week, a young lady driving a black car left us a present of a black plastic bag full of household rubbish. It was full of recyclables that could have been brought to Ballymount and they would have taken it off her for free. This is anti-social activity of the worst kind and a kick in the teeth to local residents who cut the grass and keep the area tidy.”
The Echo asked SDCC about Cll Duff’s assertion that illegal dumping in the county is getting worse.
A spokesperson for SDCC said: “The issues of litter and illegal dumping in the County are in general responded to by the Council’s Litter and Waste Enforcement staff with regard to investigation, and thereafter by the Public Realm Maintenance Section with regard to the clean-up of dumping sites. In certain circumstances the matter of illegal dumping is responded to by this Council in a cross-departmental manner when this approach is deemed to be necessary, with the Housing Department and Environmental Health Officers being called in to assist in the investigations”.
The spokesperson added. “The Council has well-established links with the Gardaí, tidy towns groups, links with business through the Chamber of Commerce and links with other voluntary bodies through the Environment SPC, for example, and these connections are used on an ongoing basis by the Council in its overall response to the matter of illegal dumping.
All reports of illegal dumping are investigated by the Litter Warden Service, with dumped material searched for evidence. Enforcement action, pursuant to the Litter Pollution Act 1997, as amended, can only be taken where evidence is found or where a member of the public is prepared to provide a witness statement. The Council, as ever, encourages residents to provide information to help us deal with illegal dumping and littering. Reports of such can be made by email on info@sdublincoco.ie, by telephone on 01 4149220 or on fixyourstreet.ie”