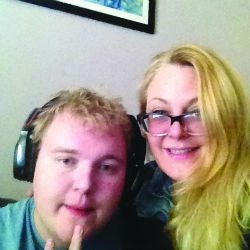 A SINGLE mother who has been on a priority waiting list for residential care for her 20-year-old son since 2009 has criticised the health service for abandoning those with intellectual disabilities and their families.

Jen Donohoe lives in a local authority home in Whitechurch with her son Joseph (20), who has intellectual disabilities, severe autism and epilepsy.
From Monday to Friday, Joseph attends St Michael’s House until 4pm, with Jen being his sole carer each evening and at weekends.

“I’m on alert 24/7, Joseph needs to be supervised at all times,” Jen said.
“I have had to fight for everything for my son, I even had to go to the High Court to get Joseph into school – which resulted in him not starting school until he was ten.
“We have been on a priority waiting list for residential care for Joseph since 2009, and it has been recognised that he should have two people caring for him at all times.”
Jen told The Echo that the HSE has recently offered Joseph a possible place in a private care home in Offaly.
“Offaly is so far away and will impact on our ability as a family to visit Joseph,” Jen said.
“There are about 40 families trying to get residential care in St Michael’s House, but because the Government is privatising everything, no funding is being provided to existing and experienced voluntary bodies such as St Michael’s House – which has no money for building or staff.
“I want Joseph to maintain some normality when he is eventually placed in a care home, he needs to be close to his family and he needs to be somewhere that is appropriate to his needs as a person – not simply referred out to a private business.
“The Government needs to support existing services which have been established specifically to care for people with intellectual disabilities.
“Making a quick buck should not be the main priority here, people should be.”
County Mayor Sarah Holland, who has been campaigning on behalf of Jen and Joseph, has this week asked the Minister for Health to review his policy of ongoing cuts to residential services for those with disabilities.
Believing that chronic underfunding to disability services is causing untold misery, Mayor Holland said: “[Joseph] needs total supervision, i.e. two carers at all times, and plenty of space, but he is confined to his small council home with his mam, who is struggling to cope.
“St Michael’s do not have the money to give him the residential care he desperately needs and the HSE have said they don’t have the money to fund the place.”
She added: “They are finding it hard to maintain existing services, never mind provide much-needed places for new residents.
“Those with intellectual disabilities are unable to shout – their voices can easily be ignored.
“Well I am shouting on their behalf – St Michael’s needs funding to maintain services and to provide places for our vulnerable citizens.”
According to St Michael’s House annual report, released on July 13, the cumulative effects of previous cuts together with the ever-increasing demand for services and the increasing complexity of their service users’ needs, has led to a significant challenge to maintain existing services.
The HSE did not reply to The Echo’s questions in time for print.