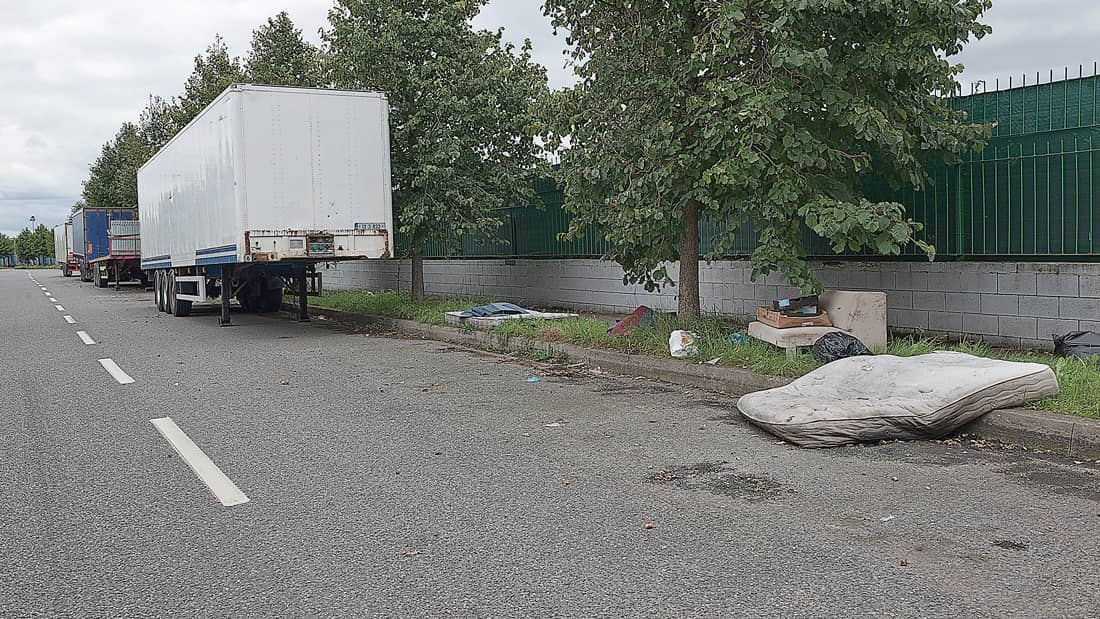 Illegal parking and dumping are creating a hazard risk

ILLEGAL parking and dumping are creating a hazard risk in an industrial estate, according to a ratepayer who feels the council have “forgotten” about the commercial area.

The activity is occurring on Crag Terrace in Clondalkin Industrial Estate.

Photos this week show truck trailers parked on double yellow lines and illegal dumping nearby on the footpath.

“The trailers are parked dangerously, on double yellow lines, and this attracts dumping,” said the ratepayer who believes the issue has become more prevalent over the last 6-12 months.

The Echo understands the trailers are repaired by a company in the estate.

“I was trying to rent out one unit to a customer, but when I brought someone in, he said it is not an attractive estate,” said the businessman, who pays rent of “€15 – €16k a year” for two units in the estate.

“Companies here do their own repairs and cut the grass. We used to cut the grass on the main road but the council installed trees along the verge. We can’t cut the grass there anymore because of the trees.

We asked the council about that when they came back out and they said they didn’t think of that. I think South Dublin County Council have forgotten about Clondalkin Industrial Estate. They would not tolerate this at Grange Castle.”

“Gardai said they are carrying out a review. The council claim it is an enforcement issue, basically kicked it down the road.”

Cllr Francis Timmons (Ind) said: “I have asked South Dublin County Council to deal with the Illegal dumping and the guards to deal with parking issues at Crag Terrace in Clondalkin Industrial Estate.

Both issues are not acceptable and companies paying high rates should be getting a better service. I will raise it with the council again.’’

A council spokesperson said: “Dumping at this location is a continuing problem and incidents reported or detected are investigated as they arise.

“While previous reports suggest that vehicles parked on the roadway were potentially providing cover for illegal dumping at certain locations, especially on the entrance roadway, our parking section has not had previous reports of illegal parking along double yellow lines which will now be addressed.”