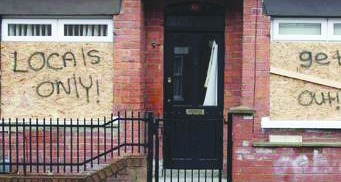 ANTI-social statistics for Tallaght are so far this year showing a rise in the number of people reporting racist attacks and criminal activity to South Dublin County Council.

Each quarter, the council provides statistical analysis of anti-social activity in the estates and developments it is responsible for.

Stats for the third quarter of 2015 were recently released and while many of the categories are on par with last year, there are a number of areas that have experienced a jump.

This year, 1,252 actions have been taken to date, with the year expected to close off on a similar note to last.

However, while reports in certain areas have decreased, the number of people contacting the council in relation to criminal activity and drug-dealing in their communities has more than doubled this year – with 20 reports in 2014 compared to 49 incidents reported in the first eight months of this year.

Complaints concerning the physical conditions of gardens, mainly due to rubbish not being disposed of properly, have also jumped from 16 in 2014 to 37 in the first eight months of this year, with reports of squatters and illegal occupiers also on the rise from 22 last year to 26 so far this year.

Gerry Fitzgibbon, administrative officer in charge of anti-social estate management and traveller accommodation, told The Echo: “These figures are quite positive for us in that they are not showing any massive increase.

“However, we see the increase in some areas as positive because it shows that more and more people are reporting incidents and acts of criminal activity in their communities.

“We need people to report incidents, so that we can pro-actively and quickly address issues.”

He added: “Sometimes we have to link in with other departments like, for example, when it comes to reports on teenage groups hanging around we liaise with the parks department – and as a result we may introduce extra lighting into an area or cut back overgrown areas to open up public spaces.

“We have had an increase in the number of reports concerning young gangs who hanging around, but the biggest increase this year are definitely about racist attacks.

“This is a more difficult issue to solve as at times the incidents involve young kids, so the council and a community Garda meet with parents. We are also trying to enhance ongoing education on integration.

“These projects on the ground in communities and in schools are making a difference, but it will take time.”

Warnings issued by the council and interviews held are also up as a result of people communicating with the local authority.

The council encourages people to continue reporting incidents, confidentially, to its housing department on 4149000.