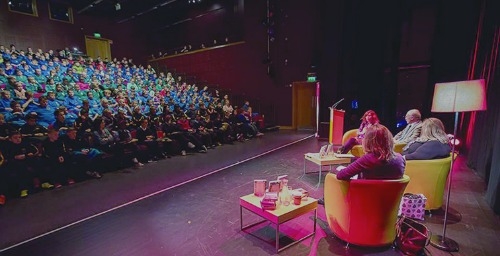 NEARLY 2,500 people took part in this year’s Red Line Book Festival, including a Canadian couple who attended a writing workshop while in Dublin on holiday.

The unique celebration of reading and the written and spoken word this year boasted 33 diverse events for all ages and interests, with quality events drawing national and international writers to South County Dublin – making the arts accessible to local communities.

Well-known writers such as Hugo Hamilton, Martina Devlin, Dermot Bolger, and TV and radio personalities, including Joe Duffy, Gerry Duffy and Pete Wedderburn, aka Pete the Vet, contributed to the vibrant festival, which also provided a platform for emerging and established local writers.

Nearly 2,500 people attended the festival, with participants stretching from schoolchildren to members of the active-age community – proving that an appetite for literature, reading, writing and the spoken word is thriving across all age groups within the county.

Domitilla Fagan, of South Dublin Libraries, which organises the event, said: “We were delighted with the turn-out.

“Many of the events were booked out, including all of the schools events, TEDxTallaght, Haunted Ireland in St Enda’s, Exploring Dublin in Ballyroan, Circle & Square in Rua Red and Library after Dark Writers’ Cabaret in the Civic.

“Quite a few people attended two or three events during the week and we had visitors from outside Dublin and abroad, including the delegation from Uppsala University which joins us every year for Readers’ Day.

“We even had a Canadian couple on holiday in Ireland who joined one of our writing workshops in Palmerstown library!”

She added: “The feedback from the audience has been extremely positive, everyone appreciating the variety and quality of the programme.

“The festival will come back next year, always in October and we are already looking at possible programming for it and how best to develop further the initiative.

“We were delighted to have The Echo on board as one of our media partners and would like to thank all the festival venues and other partners who supported us this year.”