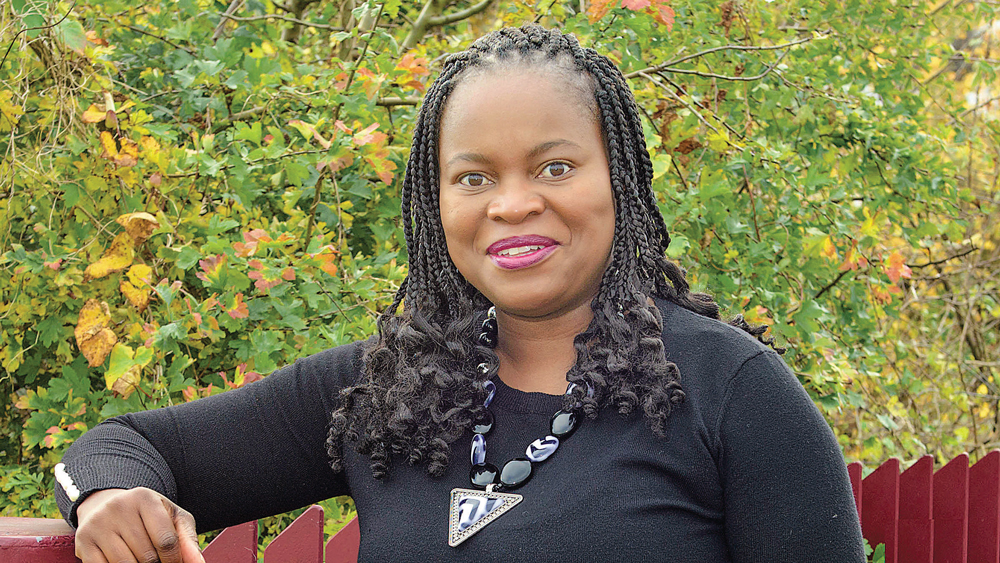 That intense feeling of sorrow we experience when somebody dies is known as grief and is unavoidable.

People experience grief in different ways and the hardship that can follow can fundamentally change perspectives.

It is during times of deep unrest that Joy-Tendai Kangere kicks into gear, leaning into the grief to enable her to change directions in her life and pursue her dreams.

“I’ve always been a child that loves adventure and new challenges, and it helped because my mum – she only retired two years ago – was a primary school teacher.

“So that helped a lot. I had always been very good with my academics, so it didn’t really bother me to settle in and then try to move on to the next thing.

“I’m from a family of girls only, but my dad thought me I could be anything I wanted to be and the same things that boys could do, I could do.”

The eldest of five girls, Joy-Tendai’s mother was a primary school teacher and her father worked for the Immigration Department.

Unlike in Ireland, physical activity through sports is intrinsically baked into the education system in Zimbabwe.

While physical activity is an allocated time slot during the day in both education systems, extra-curricular education is an addition to the Zimbabwean programme. 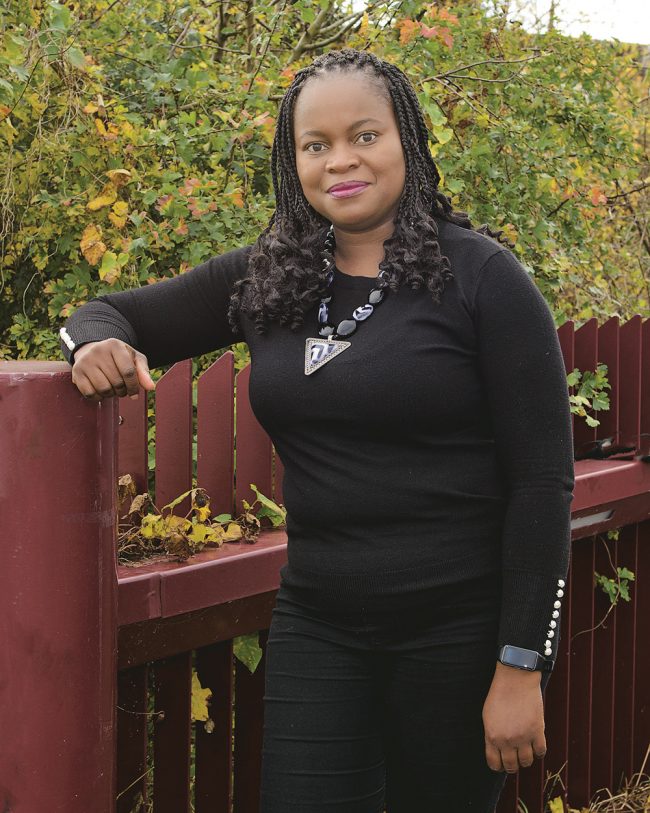 Through playing the likes of basketball, tennis, rugby, soccer, swimming, cricket and softball everyday after class, Joy-Tendai was able to develop a level of resilience that would stand to her for the rest of her life.

“Sport is an integral part of education, so we would start at half eight in the morning and finish around 5.30-6pm,” she tells The Echo.

“Extra-curricular sports makes a person well-rounded and I think I can attribute some of the determination of the things that I do to that sporting background.

“You want to win, you learn how to be a team player, you never give up. You’re losing a match, you want to give it your best so you fight to the bitter end.

“It’s really important and it saddens me that it’s not something that’s given in Ireland and I wish my children could have that extra-curricular – and being a core part of the education curriculum.

“If school finishes at 2.20pm, then from 2.20-5pm its sports. Even though the day would have had gym or PE. You’d have your PE within the class timetable and then after that, you have sports.

“It’s the mindset. You need both. It’s a holistic way of education when you’ve got the academic and you’ve got the sports or extra-curricular activities.

“Especially you’d find that after trying to study, if you have an hour or 45 minutes of exercise, you can study more and you’ll find you’re able to grab concepts better.”

Academia and sport was still very much at the forefront of Joy-Tendai’s mind when she headed to Jameson High School in Zimbabwe for her secondary education.

Witnessing racial injustice and being in schools which segregated students based on skin colour gave Kangere a determination for chasing justice.

“I knew from the age of six that I wanted to be a lawyer, so from that, I picked my subjects and got involved in public speaking, debating, being student leader, prefect and all that,” she says. “That was all something that came naturally to me.

“Growing up witnessing apartheid in South Africa and the social injustice, especially with  black people failing to get representation both in Zimbabwe and South Africa.

“Just knowing there were people who cannot access justice because they don’t have legal representation, gave me that position where I could walk towards equality, putting things in place that create equality.

“My dad at a very young age read to me the decision in America, that you might have heard about, in Brown versus the Board of Education, where Ruby Bridges was the only black girl during segregation and she suffered a lot going into schools which were segregated.

“The fact that the colour of your skin would stop you from accessing education – those subdivisions were also prevalent in Zimbabwe and South Africa.

“That was something that I felt, even at a young age going to school. I would have been the only black student so I could relate to the physicalities and hardships that people face in those situations.”

Pupils in Jameson High School had their A-Level examinations marked in the UK when Joy-Tendai was in school.

Throughout the six years in high school, Joy-Tendai would have sat exams in Year Two, Year Four and finally her A-Levels in Year Six.

In order to sit her A-Levels in her final year, she needed to pass the previous two sets of examinations.

“When I did my Year Four exams, that was the year my dad died,” Joy-Tendai explains.

“Actually, one of my exams fell on the same day as my dad’s burial.

“I did my exam in the morning and went and buried my dad in the afternoon.

“It was very difficult (to do the exam) but I knew it was something that my dad would have wanted me to do and I suppose, also, we all handle grief in different ways.

“For me, not stepping back and just honouring my father’s life was my way.”

Only 16 at the time, Joy-Tendai powered through to get an A in that specific exam.

Following the death of her father, Joy-Tendai’s family had some financial hardship with the five children relying on only her mother’s salary.

With fees for school coming up to complete her final two years and her family struggling, Joy-Tendai took the initiative to start a tuck shop, supplying food to local construction works, soldiers and passers-by.

“I started my own side business selling different things in order to supplement the family,” Joy-Tendai recalls.

“My ‘Leaving Cert’ years will always be memorable because I was going to a school were there was a lot children coming from very wealthy backgrounds.

“It was a time where I realised it was particularly difficult for me – not having money to get the bus and having to walk to school, not having lunch money.

“Going in with a very old uniform while everyone else has brand new uniforms.

“I remember trying to jump over a fence and I tore my skirt, I couldn’t afford a new skirt.

“So I finished off the year with a patch on it.

“I just concentrated on the long game – so what that you’ve got a torn uniform or a patchy skirt.

“It’s a very difficult situation when you’re a teenager of course, but it’s one of those things I’ve learned to just get on with in life. Hardship teaches you a lot.”

Joy-Tendai prevailed to get through her A-Levels and after being informally trained in Information Technology (IT) during the tech boom of the Celtic Tiger, she got an offer to move to Ireland through working in the industry.

“Sometimes informally taught things are a stepping stone to the next step in your life,” she adds.

There was a bit of an adjustment period when Joy-Tendai moved to Ireland, but she felt like there would be an understanding between the two nations.

“It was quite difficult because I didn’t know anyone in Ireland,” Joy details.

“I felt that being in Ireland was the best place for me because I just felt that Irish people would understand because of the colonial-rich history – with both countries having been colonised by the British.

“I felt like I was going to a country where people were more empathic about the lived experience of discrimination.”

When asked if she found that hunch to be true, Joy-Tendai says “in part”.

“Of course you’re going to get people that are ignorant,

“The first weeks of being in Dublin, I was bated by a woman who told me to go back to my country.

“That would have been recurring, going into workplaces where people don’t believe what you’ve managed to achieve.

“Being asked questions like ‘how is it possible that a black woman from Zimbabwe would know this thing?’, as if there’s a certain type of person that should know the thing and you’re not that type.

“Being passed over for jobs and being asked to do nominal jobs.”

One would think that Joy-Tendai’s nature would be to try prove those discriminating against her as wrong – but no, she displays strength far beyond that.

“What I do is, when people have planted doubt in things that I’m capable of doing and I know that I’m able to, I’m going to prove to myself that I was right, I was able to do those things.”

Throughout the 2000s, Joy-Tendai worked in many different industries such as doing door-to-door sales, administrative compliance and being a cleaner in McDonald’s for a time in 2003.

All the while, Joy-Tendai had her first-born child and continued to support her family back home in Zimbabwe.

“In 2013, while I was doing that job, I had my two children and I was expecting a third.

“Unfortunately, under tragic circumstances, my baby died and I also had a near-death experience.

“That left me shattered, lost . . . there was a lot . . . trying to deal with the grief of the loss – I felt like it was an opportunity to go back to education.

“It was a way of fulfilling the promise to that six-year-old girl and also, honouring my son’s life.

“I don’t know what he would have become in life, but through me studying and going through the course, I feel that part of him is being honoured. I feel like I’m here doing it for him.”

So, Joy-Tendai successfully returned to education as an adult learner through the University College Dublin Access and Lifelong Learning programme.

This prepared her, in not having formal education, for studying at university level.

Having completed the Access to Arts and Human Sciences course, this enabled Joy-Tendai to pursue a Bachelor of Civil Law Honours degree.

From there, the Firhouse resident completed the Barrister-at-Law degree course at King’s Inns and is currently a Pupil Barrister, practicing at the Four Courts.

“There’s a lot of learning and things to be done,” Joy explains.

“When I started, it wouldn’t have been as diverse as it is now and it’s good to see that there is more diversity at at the Bar – including men, women and people of different ethnicity.”

Reflecting on her journey and when asked what she would say to her six-year-old self, Joy-Tendai offers up a message that has been a common thread throughout her life – the long-game.

“Always believe in yourself, you are your best cheerleader,” she says.

“No matter what other people tell or persuade you from what you want to do, if you have a dream that is implanted within you, hold onto that.

“Some people are able to access things immediately, their road is A to B. For some people it’s A to Z to B to E.

“What I’m trying to say is concentrate on the long game.”