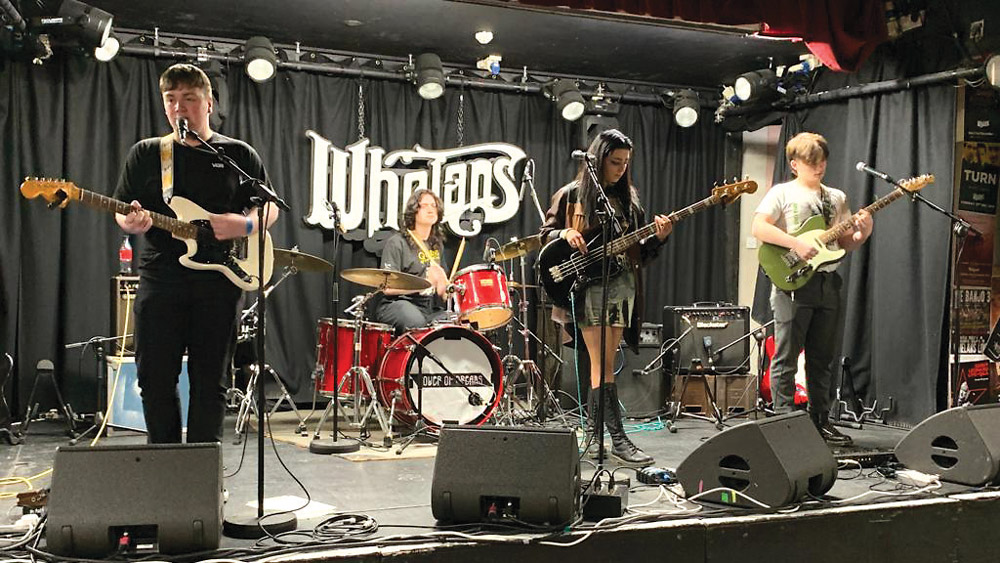 Insubs is a four piece band from the Tallaght area. The band is a mix of influences with an undying love for creating music and for each other.

Insubs formed almost two years ago and consist of Luke Melvin on lead guitar, Daniel Monaghan on rhythm guitar and vocals, Cain Butler on drums and Molly Elliot on bass and vocals.

Throughout the pandemic they kept on making music together, even though exposure was difficult. In December 2021 Insubs finally had the chance to play their very first gig in the Sound House on Eden Quay.

Before the band were able to promote themselves they had to come up with a name. According to Insubs, they went through several name changes.

However those names, such as ‘Armant’ and the ‘Sisters Of Panic’ never lasted very long.

“The name Insubs came as a slip of the tongue and we chose to stick with it, as far as the meaning behind it goes. It’s memorable and people do ask the question constantly of ‘where did it come from?’ and to be honest we can’t seem to explain it. It is a good band name in our opinion anyway, because it doesn’t hold any pre-existing notions before people listen to our music, so they can’t judge a book by its cover,” said the four members of the band.

Insubs would describe their music as alternative or indie rock with dynamic and fast pace driving guitar melodies, powerful and expressive drum with melodic basslines.

They told The Echo that their music can really drift from genre to genre. Some songs would be Surf rock, Indie, post punk, alternative rock or even new wave.

“We are a group of four who listen to different influences, so what we bring to the table can differ wildly, but we always manage to make it our own in all our song writing. Our song writing process really comes from us jamming and trying new things or working on something one of us had already written and then adding to it, but jamming and free-styling is really where we make most our material. The best pieces come when we are all just playing what sounds good and you really get to hear what everyone is most natural and best at creating.”

All four members of the band hold a great passion for music. That’s why they wanted to form a band based on their mutual love for music.

“Music is the most important thing to all of us, in simpler terms we eat, sleep, and drink it, making everything we put out something we have put our whole selves into. As we develop and grow as musicians, especially now writing new material our main goal is just to always be improving.”

The inspiration for their music really comes from everywhere, they told The Echo. They grew up listening to bands like the Smiths, Foo Fighters and The police.

Genres including metal, brit-pop, Ska and Shoegaze weren’t left out. In these bands and genres they find their inspiration for their own music.

“Inspiration from what we listen to is what makes our music interesting to play, because we never really make the same song twice. There’s always something new we want to try or heard somewhere that we try to incorporate in our way. We all enjoy each other’s differences so it never gets boring.”

Recently Insubs got the chance to tour with the Irish rock band Power of Dreams. The experience they had with touring was surreal for them.

“We made sure that we gave it everything we possibly could, and we would do anything to do it all over again as the venues, atmospheres and support was unmatched by anything we have ever done before,” said Insubs.

During that tour, the four members decided that they want to continue their band for the rest of their lives.

At the moment, the main goal of Insubs is to keep making the best music they can and get it out.

“Our new music and ideas definitely outstand anything we have previously made and we are very excited for the recording process. Our main plans for the time being is writing and gigging as much as possible.”

In the near future, they are planning to do shows around the Dublin area, however nothing is confirmed yet.