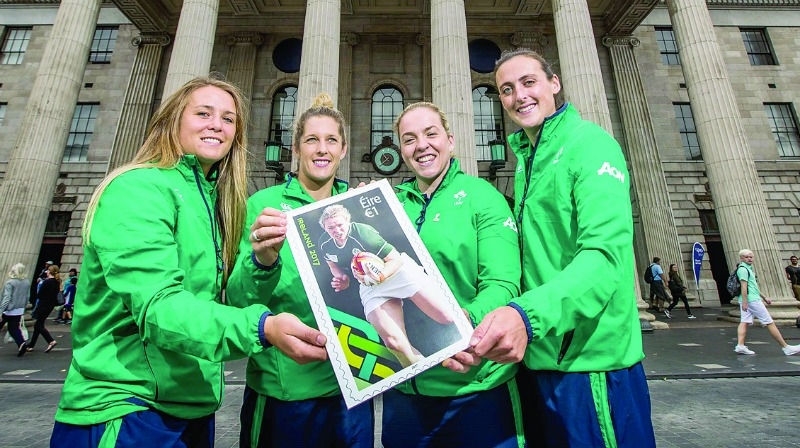 Irish Women's Rugby star Hannah Tyrrell was at the GPO to unveil a special €1 postage stamp celebrating Ireland's hosting of the 2017 Women's Rugby World Cup from August 9 to 26, in Dublin and Belfast.

This special stamp and limited edition First Day Cover envelope may be viewed and purchased at irishstamps.ie, at main post offices and Dublin's GPO stamp shop.

“It's such an honour to represent Irish Women's Rugby on this special postage stamp” said Niamh Briggs, the Ireland Women's Captain at the GPO.

“It marks this special event for Ireland and will really increase awareness of the tournament in the lead-up to the Women’s World Cup. The Country has truly embraced Women’s Rugby and the Women’s Rugby World Cup on home soil will be a celebration of all sports and all those who play and support women’s sport”

A former Dublin GAA player, Clondalkin star Hannah Tyrrell will have a key role to play for Ireland.

Hannah plays on the wing and made her debut in 2015. 12 teams will take part in this, the 8th Women’s Rugby World Cup in which the pool stages will be played at University College Dublin and the final stages held at Belfast’s Queens University and Kingspan Stadium.

Tickets for the Semi-Final and Final Stages in Belfast are available from www.ticketmaster.co.uk. Further information on the tournament can be found on www. www.rwcwomens.com