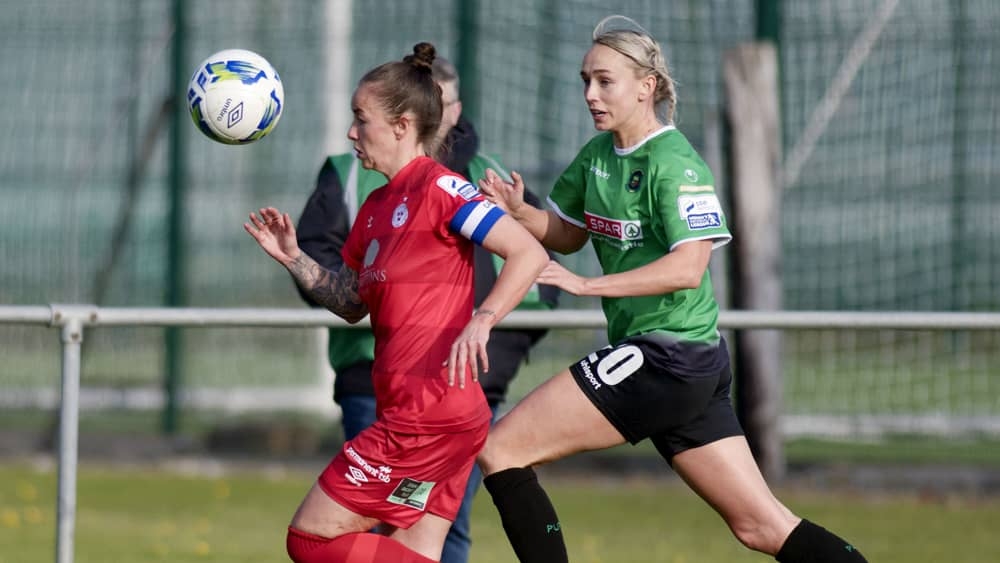 “It was a really important win for us” – Walsh

IT MAY still be early in the season, but Peamount United defender Claire Walsh feels last weekend’s home triumph over Shelbourne in the Women’s National League was a significant one nonetheless.

With the Peas’ chasing a third consecutive title, Eleanor Ryan-Doyle and Áine O’Gorman shook the net to give the Newcastle club a 2-1 victory at PRL Park in Greenogue on Saturday.

Although 2020 runners-up Shels made matters interesting with a second half goal from Ciara Grant, Walsh wasn’t the least bit surprised to see them fighting back so strongly.

“A very tough game, but Shels are a top, top side” Walsh remarked.

“Whenever we play each other there’s rarely much between us. I think we were really clinical in the first half, we got the two goals.

“Then we just defended really well in the second half, but they really put it up to us. It was a really important win for us.

“It was great to win at home. It’s always tough being away and it’s great when you’re in your home ground and you can get three points.”

Having played just twice since the WNL got underway on March 27, James O’Callaghan’s side will now be entering into a hectic period of action. This Saturday’s trip across the city to face Bohemians kick-starts a busy schedule of seven games in the space of 42 days for the defending champions.

Facing debutants in last year’s league, Walsh acknowledged Bohs are an ever-improving team and Peamount will need to be on their toes for their visit to the Oscar Traynor Centre (kick-off 2pm).

“I think we’re expecting a really tough game against Bohs. Last year they were a tough team to beat. I think going into it we need to treat it like every other game.

“We have massive respect for Bohs and they’ve signed a few good players this year. I think they’re going to be a great team in the next few years.”

Six days before getting the measure of Shels in a Dublin derby, Walsh was lining out for the Republic of Ireland women’s team in a friendly encounter with Belgium in Brussels. This was the Wicklow native’s first senior international start, after previously featuring twice off the bench in 2019.

Walsh was thrilled to be given a chance to shine by Ireland boss Vera Pauw and was greatly encouraged to be amongst a strong Women’s National League contingent during this international window that also saw her being named as a substitute for a narrow home loss to Denmark.

“I was personally delighted. I was really happy to be given that opportunity. I think there was five of us [from the WNL] that played during the two games. Jamie Finn, Emily Whelan, Ellen Molloy, then Aine [O’Gorman] and myself from Peamount,” she said.

“Everyone got game time as well, which was great. Everyone did themselves really proud. Credit to the league and credit to the clubs as well for having the players ready to play at that level.”

NEWER POSTVaccinations for ages 65-69 starts in Citywest this week
OLDER POSTLocal Faces: Stephen Stroughair – The man behind the famous ‘Lighthouse’ in Kilnamanagh