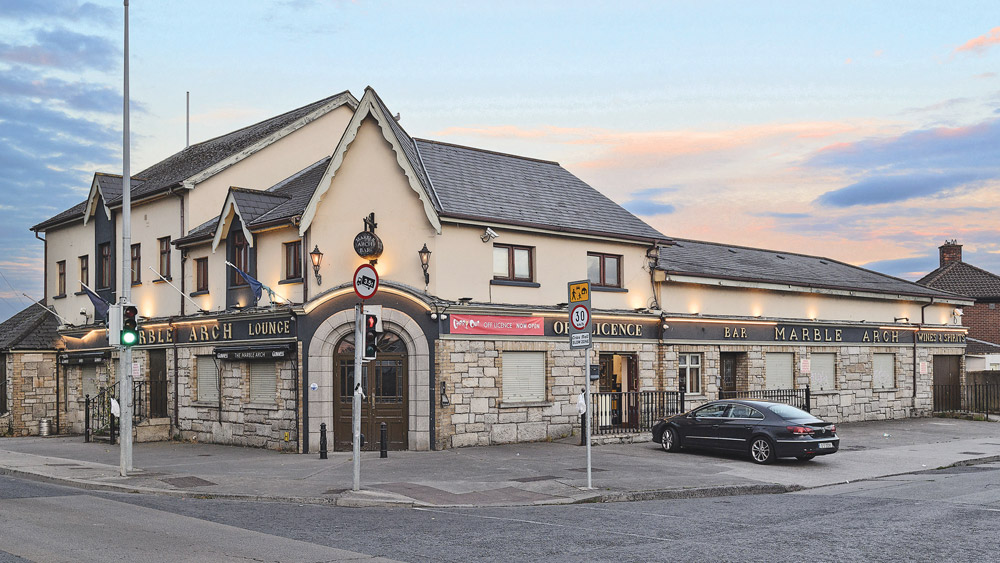 Jail for man who was involved in Marble Arch pub robbery

A man who was convicted of attempted murder and who was part of the robbery of the Marble Arch pub in Drimnagh has been jailed for four-and-a-half years, reports Claire Henry.

Darcy, of John’s Lane West, Dublin 8, also pleaded guilty to possessing an imitation firearm and one count of using a car without the consent of the owner at Long’s Place, Dublin 8, on December 18, 2021.

Darcy was on bail when he was found in possession of the imitation firearm – he has 43 previous convictions.

He previously served a nine-year sentence for attempted murder.

Imposing sentence at Dublin Circuit Criminal Court today/yesterday (FRI), Judge Orla Crowe said Darcy had a long history of offending and is considered by the Probation Service to be at a very high risk of re-offending.

Judge Crowe noted that the pub was not a domestic premises and had been unoccupied at the time. While the robbery was “unsophisticated”, she said it was a “serious offence”.

Judge Crowe handed Darcy a three-year sentence on the burglary count. On the count of possession of an intimidation firearm, she handed down a two-year sentence.

Both sentences will run consecutively and will be backdated to December 2021, when Darcy went into custody. The judge suspended the final six months of the sentence on strict conditions.

The court heard that gardai were on mobile patrol in the early hours of August 18 when they spotted a car parked outside the Drimnagh pub. Gardai noticed the pub’s alarm was ringing, and the shutter had been forced open.

Two men were seen trying to push a cash register under the door, but they retreated inside when they spotted gardai. A few minutes later, gardai went to investigate after hearing dogs barking on a nearby street.

Darcy was found hiding in the bushes of a nearby property. He was in a highly intoxicated state.

On a separate occasion, at around 9.00pm on December 18, 2021, a pizza delivery driver dropped the keys to his car while working on the South Circular Road.

Three men took the keys and drove off in his car. Gardai pursued the car, in which Darcy was a passenger.

During the incident, the car drove on the wrong side of the road and the wrong way around a roundabout. At one point, the car was being driven on two wheels around corners, forcing other road users to take evasive action.

The car later crashed into a parked car at Long’s Place. The chase lasted approximately 10 minutes, moving from Dublin 12 to the Dublin 8 area.

The three occupants fled the scene, with gardai in pursuit.

Darcy was seen fleeing the scene in possession of a plastic bag. He was seen discarding this bag which was recovered by the gardaí. The gardaí found an air gun in the bag.

Keith Spencer, BL, defending, told the court that the air gun in question was plastic and could be freely purchased in shops. He said at no stage was the gun brandished or used in any way.

The court heard Darcy entered early guilty pleas and has been in custody since December 2021. He had a difficult childhood and was expelled from school as a young child. He then began to socialise with older children who used him as a tool in their criminality.

Darcy was released from prison in 2020 during the Covid-19 pandemic. He found the pandemic very difficult and relapsed into drug use.

Mr Spencer told the court that his client is filled with remorse, regret and shame for his past offences.

Urine analysis reports were presented to the court, which shows that Darcy is now drug-free.

Letters from his sister and partner were handed into court, highlighting his difficulties while growing up.