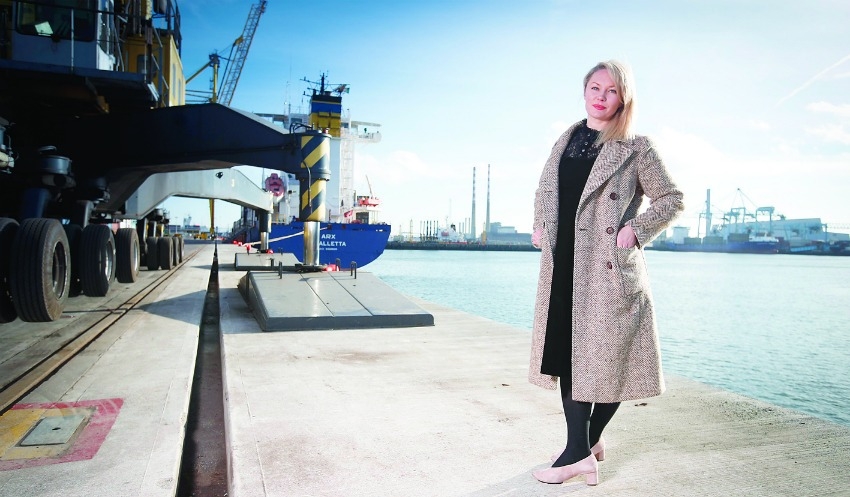 THE power of using a witch as a female archetype takes centre stage at Ireland's representation at this year's Venice Biennale.

Jesse Jones, an artist from Fettercairn in Tallaght, was selected to represent Ireland at this year's biennale with her piece 'Tremble Tremble'.

The piece offers an enthralling take on how women are represented, with particular emphasis on the law in relation to women's bodies.

Jesse took some time out from a busy schedule to talk to her local newspaper about what it was like to meet President Michael D. Higgins at the biennale, and what prompted her to pursue a career as an artist.

What is your earliest memory of being involved in creating art?

Art was always a big part of my home life and my family were very artistic, my dad made posters for the Elvis fan club and everything from charity raffles to trade union placards so there were always art supplies in the house.

I don't think I have a distinct early memory of making art, it's like language really, who can remember learning how to speak for the first time?

I was drawing and making art from a very young age but it never occurred to me that it was something unusual or special.

I think one of my art teachers pointed out in Old Bawn Community School that it was a talent and I should go to art school, but until then it was something I just always loved doing myself.

Some of your work has looked at the feminist dimension of the 1916 Rising and the impact of state-run institutions, why do you think art works as a vehicle for expressing political and social views?

I think art works as a way of expressing political views because of its ability to tap into the poetic. I think so much of our political life has been divorced from the poetic: politicians talk like bankers, seeing the economy as more important than society.

I think that is alien to artistic thinking.  In art, society matters. The public matters. Often art is more political than politics itself nowadays.

But people have a hunger for the poetic again and you can see that in how people are engaging with social movements which are growing out of very creative acts of resistance in our communities.

The line between the epic and everyday life can be blurred by art, but it can also be blurred by the simple political acts of the people.

We saw that in Jobstown last year with the resistance to the water charges and we are seeing it in the repeal movement too, there is so much creativity in our desire to change the world.

What was it like when you found out you had been picked to represent Ireland at this year’s Venice Biennale?

It was a shock at first, then I picked myself up of the floor and said ‘okay, I am going to work hard and do my best’.

It is an intense feeling to represent your country at anything, but the level of support and encouragement I got from the whole artistic community has been amazing.

I felt that people were really behind me and it gave me the confidence to really push my work to the next level, to make an ambitious work and challenge myself.

It was so amazing to have the support of people traveling from Ireland for the opening also.

My family all came and all the flights leaving Dublin over the few days of the “vernissage”, which is the official Italian name for the press week, were packed with Irish people on their way over for the biennale. My brother joked that it was the best feeling since Italia ’90!

You also met President Micheal D. Higgins when he visited the biennale, what was that experience like?

It was wonderful to meet President Higgins and his wife Sabina in Venice.

It was inspiring and humbling also. I was so nervous beforehand because the content of the work ‘Tremble Tremble’ is very critical of the law in relation to women’s bodies, but when President Higgins saw the work he really liked it and I was so relieved.

He understood why I made it and why it felt important to express these ideas through art at this time. I always had a lot of respect for our president and how he represents us so articulately around the world.

In real life he is a wealth of wisdom, and he had my head spinning with book references and ideas. But what is truly unique about him is how he has been unwavering in his love of culture and his belief that we as a people are defined by our ideas.

He values complex and poetic thinking, and that is a rare and valuable quality in a national figurehead.

What advice would you give to anyone who wants to pursue a career as an artist?

A good place to start is to support other artists. We are fans of art before we ever make it, so find your affinity group of other artists and work together.

It is a shared goal to be an artist, it always takes a community around you to make each of the individual artists stronger. Get involved in art – I was an assistant, a tour guide, a prop maker, an archivist, a mural painter, almost everything you could be just to help out!

That stood to me, I learned from other artists more than any academic institution.

I think it’s that simple: work hard, always be too ambitious and when you fail, which you always will, try and try, and try again.