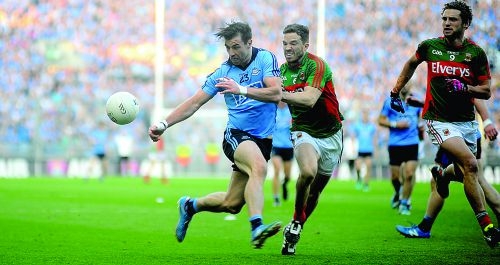 Jim Gavin: “It’s business as usual for us”

DUBLIN manager Jim Gavin said it is business as usual for his team ahead of their highly anticipated All-Ireland Final clash with Kerry in 10 days time.

Speaking at the final press briefing on Wednesday evening in Parnell Park before the Dubs held an open training session, the Round Towers man said because of the replayed game against Mayo, his side are in good condition.

He continued: “Every facet of the game is under scrutiny, and to get that back to back against Mayo is fantastic, and I think for any player from any county all they want to do is play games rather than training”.

Dublin will have had just two weeks to prepare for the All-Ireland Final having overcome Mayo last Saturday in their semi-final replay, and compared to the four weeks Kerry will have had to prepare, it could be argued that the men from the Kingdom have the upper hand.

However, Gavin said the two week turnaround is adequate for his players, while he will continue to focus mainly on what his team can do and will try and ensure they maintain their confidence.

“Obviously you have to be careful for what you wish for, but in hindsight I think those two games have served us well” he stated.

“I think two weeks from a player’s perspective is perfect. The way we train, we train smart, and all the hard work was done early in the season.

“We’re still in that process of the semi-final and we’ll do a little bit of work on Kerry in the next few days, but, to be honest, most of the focus has always been, if I’m honest, on our own game.

“It’s about what we want to do as a team, and that rhythm as a team won’t change just because it is a final. It’s business as usual for us.

On the injury front, only Cian O’Sullivan has any kind of a knock after the Mayo game, and Gavin said he is confident the player will be available for selection come the third Sunday in September.