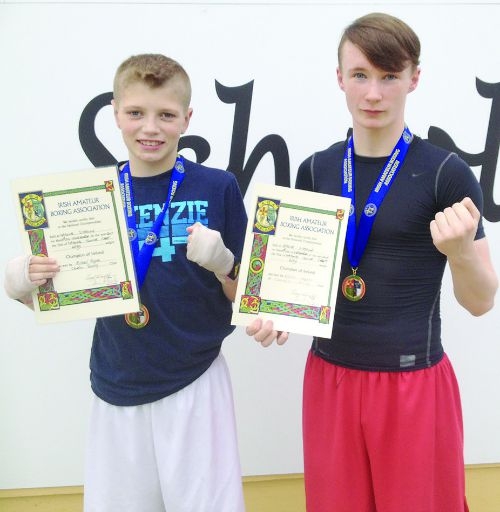 Crumlin make it a double in Nationals

CRUMLIN Boxing Club are already reaping the benefits of the new School of Excellence they set up back in January with two of their members crowned National Junior Cadet champions in the National Stadium on Saturday.

Michael Myers emerged the 48kg winner after he beat a tough David Nevin in the decider while clubmate William Hayden followed suit at 62kg, seeing off James Power of Fr Horgan’s in his respective final.

The former, after having despatched Fiachra Knox of Callan BC and Martin Ward of St Michael’s Athy in the previous two rounds, knew he would have to serve up another strong performance against Nevin of Holy Family Drogheda in the final and he did just that according to Crumlin Head Coach Philip Sutcliffe.

“That’s the best I’ve seen Michael box in a long time” he told The Echo. “He had to move up a weight for these championships, but he’s very clever and compact and he performed really well. I don’t even know how they came to a split decision.

“The first round was close but he was the clear winner and the second round was a big one for him. He won it by going forward and then counter punching his opponent and while the third was another close round, all the judges gave it to him” he recalled.

It was a superb feat for Myers who was looking to bounce back from his All-Ireland semi final loss at 46kg earlier in the year.

Last weekend’s victory could well see him box for his country at the European Schoolboy Championships in Russia next month and joining him could be Hayden.

“William is only a Boy Two but he’s a tough young lad” he said. “He boxed very clever and wasn’t rushing in. He moved about the ring well and won every round very clearly”.

Victory over Ben Bannon of Holy Family, Drogheda, on Friday set him up for the decider and he delivered another display that saw him make it an All-Ireland double.

Both Myers and Hayden were forced to miss out on the club’s recent week-long training camp at the MGM Club in Marbella last week as a result of the championships, but have now opened the door to a possible trip to Russia.

Meanwhile another Crumlin boxer Craig Kavanagh was in action at the AIBA World Junior Championships in St Petersburg, but he lost out to Rustan Muratov of Kyrgyzstan in the last 32 on Sunday.

NEWER POSTClondalkin school vandalised as reports of burglaries increase in the area
OLDER POSTJim Gavin: “It’s business as usual for us”