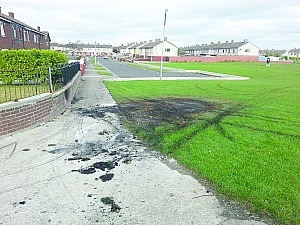 A gang of up to 30 youths targeted a tow truck operator who was collecting a burnt out stolen car in Croftwood last week.

Gardai say four cars were removed from Cherry Orchard on Wednesday night (October 22), and they are removing stolen cars from the area “as quickly as possible.”

Speaking at the Policing Meeting in Ballyfermot last week, a number of residents called for extra garda resources and speed ramps to tackle the problem.

One resident said: “Robbed cars are speeding up and down Cherry Orchard Avenue all the time. They don’t send up a garda car because they will just ram it. There was a wake going on in a house, and they were speeding outside – it’s disgraceful.