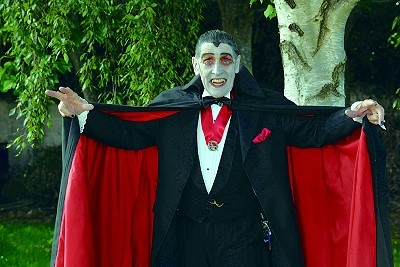 This week in our series of articles about people in our community who live less ordinary lives, Maurice Garvey talks to Paddy Finlay, aka Paddy Drac, who sharpens his fangs on charity work.

GHOULS and vampires will appear in the lead-up to Hallowe’en before passing back into the shadows, but for Paddy Drac  – there is simply more at stake than a fleeting visit to spook the denizens of South Dublin County.

Tallaght resident Paddy Finlay, aka Paddy Drac, has been a mainstay of the entertainment scene in Ireland since first donning the famous black cape back in 1969 – raising thousands for children’s charities in the process.
He took part in the annual St Patrick’s Day parade in the city centre for 44 years, and added bite to the  festivities, meeting famous friends and acquaintances along the way.
In September, Paddy took centre stage at the launch of the annual Dublin taxi drivers’ outing for special needs in Parnell Square – a campaign he has been involved with since 1969.
The idea of incorporating the persona of the world’s most famous vampire, occurred during a trip in 1969 with his father-in-law to the Clifden Castle Hotel in Dalkey.
“The hotel were hosting an amateur film, and a friend of my father-in-law, suggested I would suit the part of the Count Dracula. Sure, I thought I was gorgeous,’’ quipped Paddy, who still bears a striking resemblance to one of his favourite Count’s on the big screen – Christopher Lee.
“Christopher Lee and the Hammer movies, would be my favourite, but I do love Bela Lugosi (Lugosi played Dracula in 1931) who would say ‘I bid you welcome.’
Paddy Drac and his ‘countess’ Breda, reside at his stately manor home in Tallaght  Alucard (Dracula backwards) – Paddy often rising his eternal 70-year-old body from the coffin.
However, he has also proved adept at raising ‘’hundreds of thousands’’ for children’s charity, and regularly rubbed shoulders and nibbled on the neck of many a famous person, including Mary McAleese, Cliff Richard, Rosanna Davidson and Katherine Thomas.
He continued: ‘’It’s been amazing over the years, I’ve met a lot of famous people and won awards from Mary Kennedy, another victim, and Mary McAleese for the children’s charity work.  I managed to get spot prizes from Elton John and Chris de Burgh at various stages. One time, Gaybo invited me on The Late Late Show, and I performed the Queen song I want to break free when I was getting out of the coffin.
“The Birmingham Six were guests on the show that night, and they said to me backstage, that they thought the choice of song was very apt.”
Such is his stature in the gothic world, Paddy Drac was asked to speak at the opening of the Bram Stoker museum at a reception in the Howth Hotel.
In a somewhat ironic upbringing, the Count with no reflection, grew up on Saul Road in Crumlin, in his grandmother’s house, before embarking on a career path with the undertakers Rom Massey, and later as a porter in Tallaght Hospital.
‘’It’s either death or blood with me,’’ ooohed Paddy when recalling his career.
‘’When I lived on Saul Road, a neighbour called Mr Keller used to work in Patrick Massey’s, and he’d give us kids a lift in the hearse. I must have been drawn to that line of work.’’
A guest appearance for Paddy Drac on the Gay Byrne show on RTÉ Radio, to discuss a short-lived cardboard coffins phenomenon, resulted in chance meeting with Rom Massey.
‘’Cardboard coffins didn’t really work out in the end, but when I got home after doing the radio show on RTÉ, I got a call from Rom Massey, asking if I wanted a job. I joined up and drove the limos and hearses.
‘’Later, I would retire from that and move to Tallaght Hospital, where I worked as a porter. I still do a small bit for the undertakers. It’s a tough job, seven days a week. You can’t just go home after your shift is finished, when there are a couple of bodies to collect.’’
One thing Paddy Drac definitely won’t be giving up is his customary cape and fangs, although he admits it takes a bit longer to do the make-up and a recent ice-bucket challenge at St Dominics, presented “a real challenge”.
“I had to do it three times,” he said.
You can catch Paddy Drac over Hallowe’en at The Square on Saturday, October 25 and in the Kestrel Pub at midnight on Hallowe’en night.
In between, he has a variety of appearances to make around the country, but wherever he goes, Paddy Drac leaves his mark.