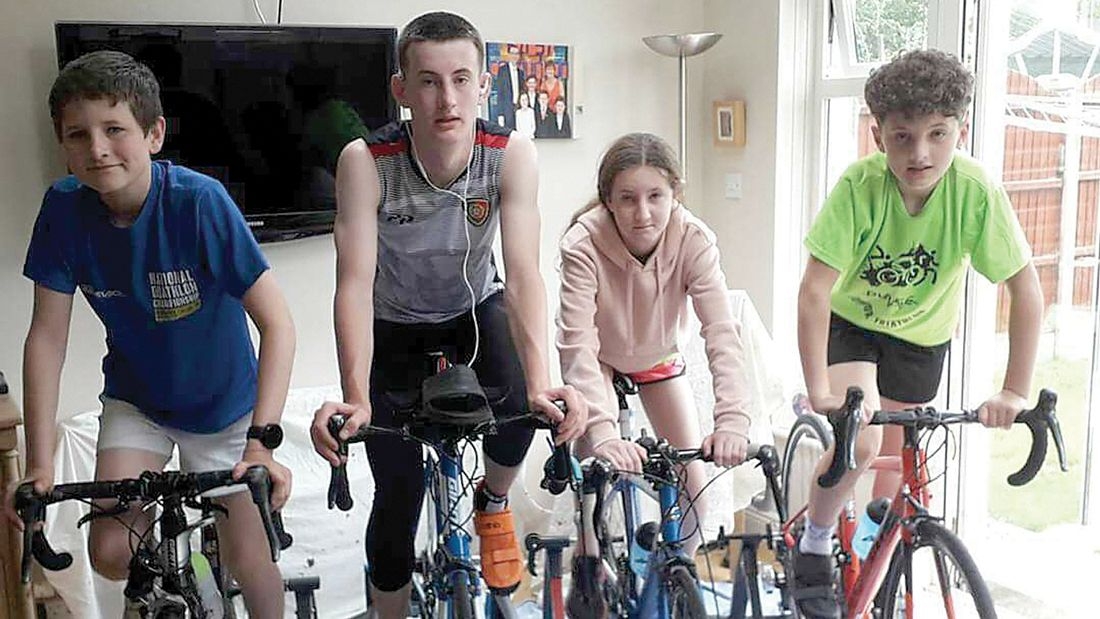 Junior triathletes jump on their bikes to remember Michaela Gonda

A TEAM of junior triathletes jumped on their bikes in tribute to one of their young club peers who passed away three years ago.

The junior members of Pulse Triathlon, a Tallaght-based club, took part in a six-hour Zoom turbo marathon in memory of their club mate Michaela Gonda, who passed away in 2017 at the age of 9.

In tribute to Michaela and in support of her parents Mike and Yvonne, the junior triathlons jumped on their bikes for Heart Children Ireland, a charity which Michaela’s dad was raising money for in memory of his daughter.

Mike Gonda, who is a member of Pulse Triathlon, embarks on a challenge each year on Michaela’s anniversary, May 12.

This year Mike climbed higher than Everest on his bike’s turbo trainer – surpassing the 8,848m height of Everest and finishing on 10,000m.

Speaking with The Echo, Dee Needham, Pulse children’s officer and coach, said that over lockdown many of the juniors from various triathlon clubs nationwide took part in zoom sessions, many of whom raced with Michaela.

“We thought it would be a really nice tribute to Michaela if her own peers could do something to raise money for this very worthy cause”, Dee said.

On Sunday, June 28, more than 50 junior triathletes from the age of six to 16 jumped on their bikes, and turbo racers, and cycled in honour of Michaela – and to raise funds for Heart Children Ireland.

All money raised will go to Heart Children Ireland, a charity which aims to enable all people affected by congenital heart defects to live the best possible lives.

“A huge well done to all the junior triathletes and their parents who took part”, Dee said.

“It was a lovely tribute to Michaela for her peers to be able to have this event in her memory, and to raise money for such a worthy charity.

“It was an enormous show of camaraderie within the triathlon community.”

She added: “Pulse Junior Triathlon Club would like to thank Gary Crossan from Triathlon Ireland for facilitating the event, and the coaches and parents from all the clubs that participated.

“Also, thanks to everyone for your generous donations.”

Pulse Triathlon, which is a not-for-profit sports club that is run by members, is always open to new members.

For further details on Heart Children Ireland visit heartchildren.ie or donate to the charity on Mike’s Every Day Hero fundraising page (Help in memory of my daughter #Chaela make a difference).