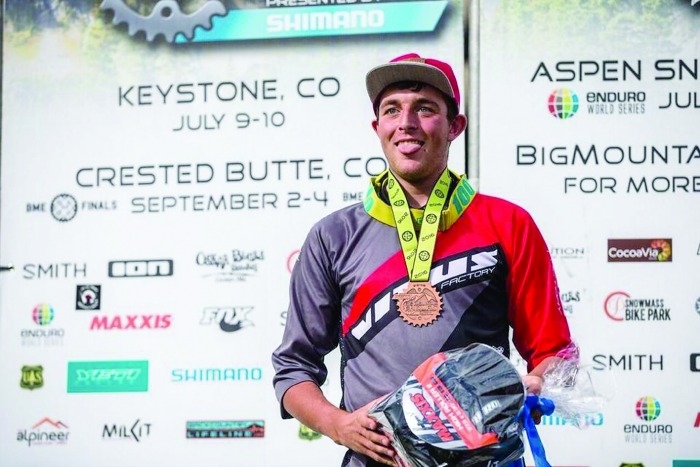 Killian Callaghan: ‘I want to be world champ’

“RIGHT now I just want to be world champion and I really feel I can achieve that”.

It’s a bold statement, but Walkinstown mountain bike racer Killian Callaghan has every reason to believe he can become the best Under 21 rider on the planet.

The 19-year-old finished fourth in the eight-round Enduro World Series in a season when he missed the opening two stops in Argentina and Chile due the financial constraints.

What’s more, he was competing without the full factory package that many of his competitors enjoy and, instead, made the most of the bike and parts supplied by Vitus.

Yet he has consistently punched above his weight, winning the third round of the Series when it came to Wicklow before then travelling to the United States where he took third in a high-altitude contest.

Solid performances in Whistler in Canada, Valberg in France and Ligure in Italy, during which time he had to contend with some bike damage and heavy falls, earned him a top-four finish.

It begs the question as to what the young rider might well achieve if he could only secure the full backing of a factory team.

Callaghan also travelled to Morzine for the Mega Avalanche and was clocked at 101.5kph in practice on the snow and carded the eighth fastest time of the 3500 participants.

On the domestic front, he moved up to the Pro Men’s division and made an immediate impact competitng among the Elite.

Indeed he carded a victory in his debut race in Three Rock Mountain, and, while he did miss a number of the rounds later in the season, he did emerge runner-up in the Gravity Enduro Series.

In the Irish National Championships he suffered another big crash, but still managed to finish fourth in the Pro Men class.

Now looking ahead to next season, Callaghan has yet to nail down a deal that will allow him to seriously compete for the World Series title.

Having already proven his worth at the highest level, he knows that full factory backing, and the bene-fits it brings in terms of mechanical and team support, would help give him the inside track to world glory.

“I don’t want to be just picking up the odd win here. I want to be world champion,” insisted Callaghan who has been relying heavily on the huge support he receives from his family as well as other independent sponsors like Barry Travers of Cable Technical Services and Ian Jackson of Pure Power Systems.

Right now Callaghan will be preparing to embark on intense training throughout the winter months in the hope that he will receive enough financial and logistical support to make a real stab at the world title.

And with the opening two races of the 2017 Enduro World Series taking place in New Zealand and Tasmania, he will certainly need some amount of backing.

Yet he has already shown that he certainly has the po tential to go all the way with just that bit more support.