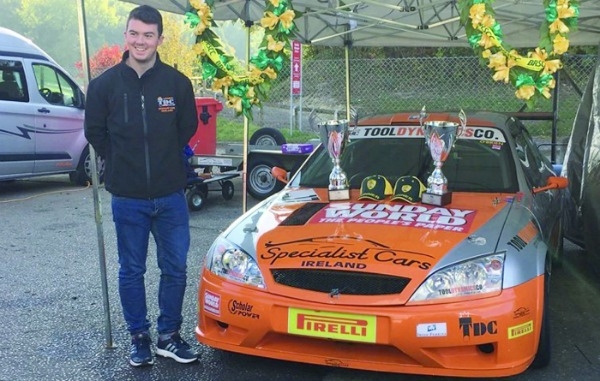 Having only secured the Irish Championship crown, The 22-year-old carded a brace of victories in the Tool Dynamics Supercars.

He suffered engine failure in testing, and was forced into Saturday’s qualifying with an untried power unit.

Nevertheless, he improv-ed his lap times throughout the session to take pole position on his final lap by more than eight tenths of a second.

The Dubliner made a great start to Race One, but got squeezed away from the line before Paddock Hill Bend and conse-quently emerged third.

Yet he set about applying the pressure and overtook for a victory of more than seven seconds.

In Race Two O’Brien made a convincing start off the line to lead into Paddock Hill Bend.

The pack were close, but he stretched the lead after Graham Hill Bend.

“I put my head down and focused on taking the second win,” said O’Brien, who set the lap record on Lap Three and was consistently faster as he recorded yet another win.

“After losing an engine on Thursday, the Specialist Cars Ireland team were just brilliant, putting a strong car beneath me once more this season, allowing me to top every session over the weekend and also set the new class lap record” he added.